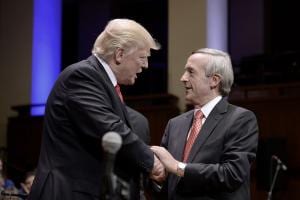 Dr. Robert Jeffress, right, senior pastor of the 13,000-member First Baptist Church, Dallas, at a recent White House meeting with the President. In the ’16 campaign, he once told Christians he’d vote for Trump over Christ! (Wiki Commons)

Forgive me for posting this, first! The rawness of it, e.g., far-right Christian evangelicals — supposedly the “base” of Trump’s “believers” in the ’16 Election — now targeted. Responsible for the You-Know-What! And here I am, armed with pen in hand, to defend them!

Initially (first), this was my Facebook reply to some cartoon labeling them “morons“. The reply was way too long, of course; no one read it — so I’m posting it here. With some minor changes.

The “moron” label for Trump’s evangelicals is from a pundit, of course — saying it, or using it, on those particular right-wing supporters.

Frankly, to me, the cartoon seems to ridicule one’s belief — not specifically a stupid decision once — and I’d never do that. Just to clear the air on my personal views!

I’ve been stupid many, many times. Some of them ending in painful lessons — e.g., instincts learned against my will. So this is a little about my personal history. Part of My own coming of age!

Are we going thru a similar crisis now in our nation’s highest office? We’re confronted not only with a voter-approved reprobate, but also one who may be a criminal?! No? One now thinking about his own pardon?

Watergate was a “teaching” moment for me on these certain hyper-adventurous politicians, following along on the history meme that “We all grow wise against our will,” e.g.

And the irony of it was, it came when I was doing my damnest (I genuinely felt) to outgrow innocence — e.g., as the gullible type many get coming from a strict religious background of believing.

Nixon as God’s Gift to us then? We ol’ slow, true believers often pulling up the rear in Life?

Well, growing up in Cleburne, TX, as Baptist fundamentalists in a much different political era, we were both conservative and compassionate, as Democrats — e.g., keep your financial belt tightened but always go by and “visit” church members in the hospital or those who’ve missed several Sunday services in a row, just to see if there’s anything you can do to help.

Remember very well tagging along with Mom on some of these visits! “A helping hand,” it was! God’s Scriptural command.

Nixon — regardless of the dressing — was my “teaching moment!”

A year and some after the Navy, I was back at Dallas’ Texas Instruments, where I’d even been promoted to an assembly line supervisor; while attending college and living off campus in a small apartment in Denton.

I’d rejected the counter-culture revolution (the hippies) — did let my hair grow longer though, being trendy– and belonged respectfully to the Republican Party at old North Texas State University in Denton (now UNT). Yes, I’m down on old membership rolls, somewhere!

The GOP clique there seemed much more “conservative and compassionate” at the time! Less airhead!

Remember well the Watergate break-in, too, and months later — October, 1972, 2-3 weeks before the Presidential Election — a heated argument with two Democratic campaign workers who came to my door one night, asking me for my vote.

“Whaddaya mean, Nixon’s a criminal!? Hell, he didn’t have anything to do with that (break-in)! Hasn’t been charged with ANYTHING!!” I told them. “‘Git him out of office,’ that’s all y’all want! And you’re pissed he won’t turn his back on his country and resign!

“And, too, you know exactly what I know! That crybaby liberal, George McGovern, doesn’t have a snowball’s-chance-in-hell of ever beating him! … so GIT OUTTA MY FACE!!!”

And…Yeah, hothead me! I slammed the door on them! And returned to my studies. I had my political crosshairs still aimed “right” then! Despite the liberal campus.

And I remember, too, less than two years later, feeling a change coming in my thinking — as I escorted all my 2nd shift diode assembly line workers over to some large conference room for Ti employees.

Big-screen TV scene set up. Nixon announced he was stepping down.

The first such president in U.S. history to resign from office. The dirty tricks had caught up to him, scalded his butt.

In slow motion, then, Watergate was like a kick in the gut to my thinking.

And eventually, I like to think, I grew a little wiser because of it, yes. Like millions of others!

But never, NEVER, did anyone even hint I was a “moron” for the way I sincerely felt once about my country!

Hee, hee! See some of y’all on down the road!