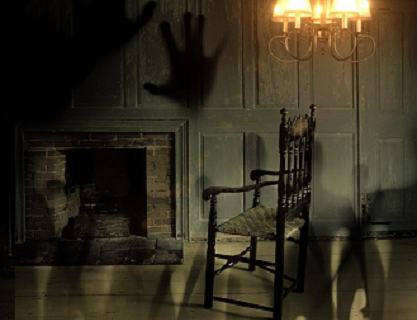 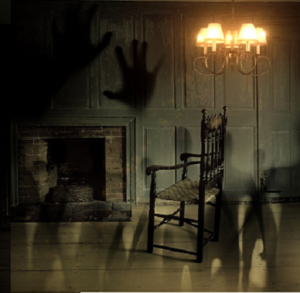 EL PASO — Nada! Leave me alone! it was. I don’t feel like wishing Happy Birthday to anyone! Ah, my old friend, Dark Depression, had returned. And as usual, it wanted the run of the house!

One recent Saturday evening was one of those times when I just didn’t want to go anywhere! To see no one! At whatever the cost!  Only my wife said no. And it was a godsend, it turned out! You’ve felt similar situations no doubt. And, like me, have found a splash of God’s works lurks everywhere if you just look for it.

Noemi had been mentioning a party to me for a week. The family of one of her best friends at church was throwing her a birthday party. “We have to be there!”

Typically, I’m never excited about these things. Growing up with a speech disability and introverted, the safest place always was where I didn’t have to talk. Away from it all!

And with maturity, realized the wider scope of disabilities.

At our last visit to a V.A. neurologist, i.e., I was warned to submerge into socially to fight my dementia. Failing to do so would lead to quicker mental deterioration, and off the cliff, I’d go, the risk was.

“Me!? I’ve lived somewhat ‘off the cliff’ most of my life! How much lower can I go? I wondered.

Noemi gritted her teeth. Uh, uh! it was.

As usual, I lost.

Driving there, her not knowing exactly where it was — e.g., more unknown in what I feared would be an off-culture meatgrinder — didn’t help my sulking either.

On the left between older parked vehicles, I swear I saw a herd of goats penned ‘neath a large tree! There room for one more in there? I thought.

Noemi had her eyes on parking. She found a place on the upper right. Getting out, my chest tightened even more. Why me?

As we approached, a row of lighted, square-shaped windows was across the center. Figures moving slowly back and forth around tables.

Are we early!? I thought.

Too, on far right ‘neath another tree, figures could be seen scurrying about a small truck backed up to an unloading dock, its warehouse-type, metal door raised —  showing a dimly lit storeroom with flickering, filtered light coming from the large room.

An inside door opening and closing? Food catering just arriving probably, I thought. We are early!?

Near the other end, at far left, were some short cement steps leading to a small porch — with a normal-sized metal door entrance there. Noemi and I stepped up 2-3 short steps, opened the heavy door, and entered. 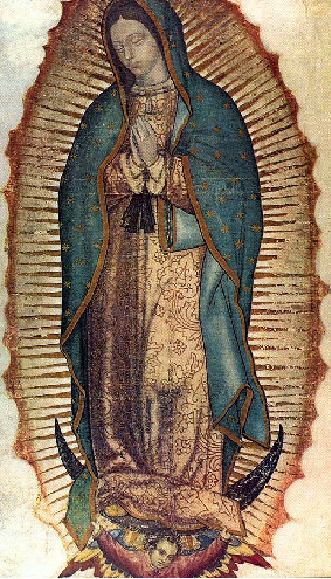 ‘Our Lady of Guadalupe’ image courtesy of wikimedia.org.

Marta was directly across near the back, far-left wall, and waved excitedly. She came over to embrace us.

Marta and Angel [AHN-khél], her husband, both were members at our church, and like Noemi, were Guadalupeanos — e.g, members of Our Lady of Guadalupe ministry group. He commutes daily to Juárez where he teaches school; Marta is a retired nurse.

Many other Guadalupeanos were there, too, who I recognized and waved to.

Marta found us a seat at the back table, near where she’d been. It was where Angel, also a musician, was crooning away lyrics of a Spanish love song.

He was in the nearby corner, set up as a one-person show — with his arms, hands, and facial expressions, all swaying to the song he was singing.

Music was from an electronic bandbox — e.g., click your selection (say, after first getting words displayed to it on your cell phone, i.e.); and sing along to music from a complete “band” — that elaborate “box” with speakers in front of you!

Sound strange? The Times, they still are a changing.

Angel and Marta have two attractive, long, black-haired daughters who were there, probably early 20s. Each would take turns singing music, too. As well as giving tearful testimonials later about their mom’s huge role in their own lives.

Ad-libbing the night away! On her 57th birthday, it was.

Between the music, a little dancing, and much time by the younger crowd attempting to smash a difficult birthday piñada, this became a soul-lifter for me!

For those new to a Latino Party — with numbers of disparate Latin-Americans soon to surpass Caucasians in U.S.’s cultural mix, “Mexican Party” is becoming passé already — don’t think you can go in, find a safe corner somewhere, and hunker down unnoticed.

Latinos will coax you out, within civilities, of course! First, you greet or introduce yourself. At least to those at your table. These people are unique in spontaneity and inclusiveness.

Also, remember time-of-arrival. Do not show up on time at a Latino birthday party. It’s rude!

Supposedly this party, i.e., was to start at 6 p.m. At 6:45, Noemi and I were lukewarm early! Teens still were on stepladders hanging balloons, poster signs, and miscellaneous decors, or bringing drinks or candies to stock the various tables.

For the next hour or so, folks continued to straggle in. Don’t ask why on this — It just is! A gradient toward non-worry, ingrained culturally, maybe.

The seat where Noemi and Marta parked me was at that back table. It was placed end-first against chairs along the back wall. With two chairs along its left-end side left open.

It was doubled with another one, creating 10-12  comfortable seats for our table‘s group! With Noemi and I (her seat was to my right) we were a complete unit.

Tables were configured such throughout, in these units (or mods) of 2-4 each. As more guests arrived, more tables were brought out to expand mods.

Just around the corner from my seat, to my left, sat a woman I recognized as a Guadalupeana also — who it turned out could speak perfect English.

I greeted her and she was very friendly. And we would exchange many pleasant conversations off and on during the night.

After her, I proceeded counterclockwise around the table, dutifully greeting the other guests as well. Then I sat down. Depression?

This is going to be OK after all! I told myself.

Well over an hour later, food still was being served to numerous other people who’d arrived. Tables and seats had been added. But most of us had been served and were finishing plates of sumptuous Mexican cuisine.

Then that front entrance door opened again. Only with some additional banging and scraping noise this time. Everyone turned to look.

The first figure to enter was a rather tall, thick gray-haired, heavy-set man, his back appearing first. He was pulling something — or someone.

Next, we saw a wheelchair, a handsome, muscular young man in it, with a vacant, distant-looking stare on his face. And then came the mother, a brown-haired woman in an overcoat, and a stern face — helping to push the wheelchair along.

She and her husband had made it to the party with their older teenage, or young adult son — who appeared to be paralyzed — having successfully lifted him and the wheelchair up the steps outside, and into the party hall.

We have arrived! their surprise entrance all but announced.

Loud applause erupted around the room. Marta, Angel and their two daughters quickly came to greet them — excitement still visible throughout the room! Other friends converged also.

Quickly, Noemi turned to me. In hushed tone, she explained the scene.

Years ago the mother, in late pregnancy — driving alone somewhere in this El Paso area — had been rear-ended by a wild driver. Who managed to drive away, as I understood.

Alone in the wrecked car, the shock of the crash either tore the woman’s placenta and/or soon after, her water broke.

And the long delay in an ambulance arriving resulted in loss of oxygen to the infant’s brain — critically injuring him.

But here he is with us now, all these years later. It was he who insisted on coming to the party, we would learn later.

Looking around for a table to seat them, Marta asked for a new table to be brought to our group. We were the only mod with only two tables.

Then shuffling of chairs began; a table was placed opposite Noemi and I.

Two more chairs were placed cattycorner from us at that far end, actually, the rear ends of the 2nd and 3rd tables, as they parallelled ours.

The young guy in the wheelchair was rolled to the table between the two new chairs. And the father, at the cattycorner end around to his son’s right, and the mother, to the left, both sat down. Almost immediately food was served to them.

A few more stragglers came in. Angel had begun singing again. And the party was grooving again.

Alternately eating while spoon-feeding your son — and, too, talking to the person next to you at the table — isn’t the easiest of fetes, admittedly. This man and woman were adept at it, however.

The mother even pulled from a side-bag a plastic, green-colored drink adapter, that she placed around a cola can, and handed to her son — who did have limited movements in his arms and fingers.

The adapter had a spiraling, plastic straw that fitted into the can, which he moved slowly to his lips, and drank from the soda.

During the next hour or so, many people came by to greet him, or to chat with the two parents.

Throughout this time I hadn’t moved from my chair. Occasionally when his wife was away I caught the father staring at me. Wondering, I guess. Who’s that red-headed gringo?

I felt both embarrassed and shy at the starkness of it.

Look for something to soften it, I muttered.

Finally, while Noemi was off somewhere else visiting — and likewise, the other man’s wife, too — I noticed a few people off cleaning tables, e.g., picking up empty plates, or tossing wadded napkins and things in one of several large trash bins set about.

I glanced at our table, grabbed some wadded paper and an empty soda can, and began walking toward one of them. It led directly behind the man and his son.

He looked up as I was passing behind his son.

And I extended a hand down to him.

He stood up so fast it startled me. All smiles.

Grabbing my hand, he told me his name.

And then excitedly, he pulled me over to his son.

In broken English, he said, “This… Patrick!”

All the while, cupping the palm of his right hand over the top of his son’s head.

An awkward pause set in. And I struggled to say something next.

But then his mom returned to the table. To her seat. She’d slid in on my left.

I greeted her warmly, too.

She glanced up at me a moment, and then her son. I think she felt a click was needed.

I looked back down at Patrick.

He was actually smiling. Nodding his head so slightly. A connection.

Maybe he’d wanted to come to this party to be part of a larger family.

And, just perhaps, Noemi and I sealed the deal!

But feeling misty-eyed — embarrassed over it, maybe — I waved bye and returned to my seat.

Noemi came back soon, and we said our goodbyes and left. And returned home.

2 thoughts on “Dark Depression to Latino Party a Spiritual Trip”