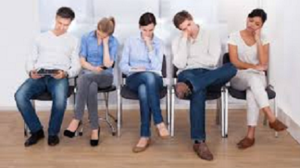 When you’re in a doctor’s waiting room about to be told a date and time a camera’s gonna be shoved up your butt for a bi- or tri-annual colonoscopy, you’re not happy. Fact of Life. Even in today’s Pandemic, this forced boredom (that actually is dreadness) we pull off only through feigned indifference.

These operations, any patient knows, can uncover gastrointestinal conditions ranging from simple abdominal pain, chronic constipation, chronic diarrhea, rectal bleeding, and such — all the way to cancer of the colon. Yikes!

If’n you’re a generic private type — like me, yes — the instinct is to leave, immediately! For you’re being asked to waive all your rights! We don’t, of course. The right to life is far greater.

Thus we sit amongst the others — in feigned indifference. Calming nerves, while pretending the world is OK. Surely, it is, we say! While dreading what’s to come nevertheless!

Doctors reserve certain days for these operations en mass today and are careful to schedule patients’ separate examination times ahead — to match computer data with proper imageries, of course. Doable diligence of the derrières!

Like a conveyor belt process, every butthole must be slotted to be wheeled into the surgery room at an appropriate time — to match the data on the computer. Medical efficiency!

Lining all this stuff us is the purpose of these preliminary meetings, which I and a waiting room full of a certain El Paso doctor’s patients were attending last week.

Most were waiting — at this particular time, in mid-afternoon — to be called to this interview with the doctor.

“Watcha gonna find in there!?” of course was on everyone’s mind initially going in. A prelude sentinel fluffed up by a whiff of justified curiosity! Like life, though, it waits its turn.

Crowded in the waiting room itself, I was uncertain of exactly who all we were. Your instinct is to look about.

Maybe some had completed their interviews — with both staff members and the gastroenterologist himself — and had been advised of their time to report at the hospital; and thus simply were waiting around for a ride home.

This waiting room was a bit crowded, and solemn, yes. No laughter, to be sure. Anywhere! As we went about covering our dread with boredom — thru this feigning indifference!

Seated directly across from me was an old, gray-haired, small woman, about 80 maybe, with a beak nose, crinkly forehead dotted with dark brown freckles — who stared blankly, passively at the black tiled floor for what seems like 15-20 minutes or more.

Pobrecita, I never saw her lift even an eyebrow!

She’s wearing one of those old, dark blue and airy, white polka-dot dresses — with a jet black, frill, lacy collar overhang — a type I ain’t seen in the longest.

Earlier, she’d been escorted to her chair by staff members coming from the right, out of what was being used as the inside patient exit door — e.g., for patients who’d completed the interview process and had gotten their date and time for the exam.

But being seated again, struck me. Usually these patients — after completing this interview — get the hell outta there!

But after glancing about briefly, this old woman’d resigned herself to simply stare at the floor. Waiting on a ride, I assumed. Never looked at anything else around her though, not even her watch.

Finally, she shifts her weight some in the chair, to reach into a large, deep pocket of the dress, her right one  — and pulls out her i-phone.

And calls someone — close by. You could hear it ringing!

About 10-ft. away in the same waiting room, behind her slightly and to her left (around a slight corner of two walls coming together, behind where she was seated), a big, brown-skinned dude with a scarred, middle-aged face — like one of those guys who shows up every other Thursday to collect rent, say — was leaning up against a niche in the wall. Nonchalantly.

Staring just as passively as she’d been. But straight ahead, though! Arms folded across his chest. Lower legs crossed at the ankles.

He was wearing a dark blue polo shirt of some type, with a small white insignia on it; and loose, light-brown summer pants.

Which the right pocket had an i-phone sticking out.

And ringing. The sound we’d heard!

He reached for it, then surely spoke into it — e.g., you could not see lips moving, nor did I ever hear any sound, either from him or the old woman sitting just across from me.

But suddenly, he stuck the phone back into his pants. And uncrossed his legs… And stepped out briskly from the wall.

And turned and walked quickly 10-12 feet down around the oblique corner — to where the old lady was seated.

And extended his arm down to her.

While never looking at her! (It appeared, at least.)

Impassively, she reached up and grabbed the arm, and then arose from her chair. Without looking at him!

And together they walked out.

While never…Never, saying a word to each other. Not one word.

Nor giving a glance to each other.

Just quietly disappeared out of the doctor’s waiting room.

A brief interruption, it was.