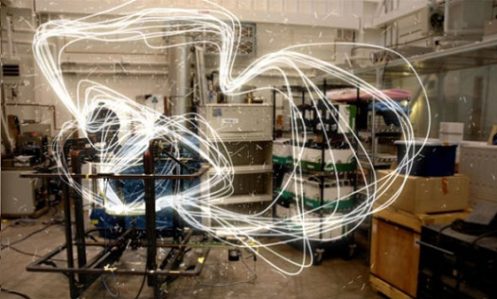 These are lines of force between two opposite charged objects, visible only because of thousands of tiny iron filings flung out randomly atop the table have moved into alignment with the unseen lines of force below. It’s best to remember the different invisible fields of forces involved around you before jumping into any heated argument — say, about your neighbor’s ratty daughter, i.e. Things can become convoluted and hot very quickly when entering new energy fields!           [Photograph by Dayna Mason on Flickr]

You the kind who spent hours as a kid wondering how hairs on a cat would stand up while the animal was rubbing itself against your leg? Or how running a comb thru your hair could generate enough force to instantly suck a small bit of tissue paper to it sometimes?

Hee, hee! This magnetism stuff (and its correlated charged energy fields) use to blow my mind so much I’d climb walls! Sorta. Growing up as a Baptist fundamentalist in rural North-Central Texas has a way of making one instinctively map the territory before ever stepping out anywhere! The Good Lord Above wadn’t the only one with unseen hands! Defend thyself!

I’d seen enough faith healings, i.e., by the time I was 10 to know sure-’nuff there was something else out there.

Going thru life wasn’t akin to playing the Lotto, but at any time you needed to be aware something could smack you up against the side of your head or remove an evil spell the little red-headed girl at church that time put on you — either one! Life was a voyage toward one of two fixed eternities Choose your path wisely!

Reading this week how NASA scientists now can make magnetic fields “visible and beautiful” (do follow the link; it’s truly something else!) reminded me of an awkward time in college physics many years later.

Going thru maturity in the early ’70s — a little tougher than escaping a wet, paper bag, for fundamentalist — I boldly walked up and interrupted the good professor’s conversation with two others, after his short demonstration on magnetic energy.

I wanted an answer to something burning me: Could what you just showed us be interpreted as one of the many faces of God?

He raised his eyebrows up at me like I’d just handed him a hot wire; moved his face back from mine maybe 7-8 inches (you know, one of those, Oh, gawd! Who’s this idiot!?); and after a few awkward seconds replied something like, “Well, I don’t know…God has many faces.”

It was at the end of the class. Smacked my lips — e.g., gave myself one of those big internal attaboys — and politely thanked him. And then walked away to let him finish his conversation with the people who I’d butted in on.

But excited I was, yes; it’d was one of those moments when I just had to have an answer.

I’d been searching for a better description of how God works (than my ol’ Baptist fundamentalist training had given me) rather heatedly for several years. One of my ol’ Navy-year yarns you can read here, i.e.

I just knew there was more to faith-healing and such from my youth than met the eye! And had to find out, by gawd.

And here was a physics professor in full regalia who almost surreptitiously was offering me one of these other-world glimpses. No way was he getting away without answering me!

In an old NTSU science hall building in Denton, he’d simply laid what looked like a clear-and-solid, plexiglass plate, coffee-table size, atop two large opposite-charged magnets on the floor (each more-or-less facing the other from opposite ends beneath the plexiglass); positioned so that the 2-ft.-high “table” he’d made was flat.

And then asked us to gather around and watch.

He pulled a small, plastic vial of tiny iron filings from his white lab coat; removed the lid; and dumped them all on the plexiglass at a spot that appeared midway between the two magnets underneath.

And then, holy shit happened! (On a micro-level, mind you.)

Those little boogers commenced jumping up and down, sliding this way and that, as though something had a Jesus-bite on ’em taking them to the Pearly Gates! They were that excited!

Didn’t stop moving until, somehow, they’d worked their way into neutral positions atop one of many force lines beneath the plexiglass plate.

All of us students watched in whispered-silence during all this! Awe-struck! Mind you, this was within a year after I’d been released from the Navy as an electronics technician.

As a 4-year, trained IFF/Radar tech, I knew something about electricity and how electrical fields of forces worked! I knew enough (as some of my ol’ 6-yr. ET shipmates were fond of saying sometimes) to be one, little, dangerous s.o.b.!

But I’d never seen one of these fields, other than on a schematic diagram.

Here was one! A field of force! Of another type, yes.

But no ley asi! Mismal! Energy is energy! A force is a force! Go after that professor! You’ve found God again, damn it! 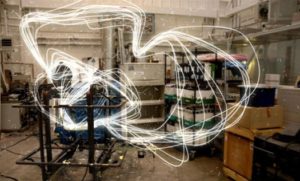 A person’s brain (not his/her heart) is an electrical generator of sorts, a force generator. Substitute mental energy for the magnetic field of force that was showing, and you can understand a little about what I was thinking.

Ever wander into a cat-fight and say something stupid? Then wonder why the seat of your pants feels like it’s on fire? You just provided a ground path for two, huge negative-charged energy fields to drain, ol’ buddy. Congratulations. It all just went thru you and into the ground! Everyone still alive? You?

Or, in trade talk, tweak a capacitor here; add a little bias voltage and maybe an inductor somewhere else over there…And mama mia, look out! We’re gonna rock-and-roll!

Hijole! Here was a plausible, reasonable explanation to all the miracles in the Bible, I thought. By religious people! In whatever the religion!

Peace on Earth! We’re in for it! As soon as I can write this discovery down and get it out! Published somehow!

Whoop, whoop! Buy your stocks now, all of you! We’re in for eternal bliss!

Not sure after I left class that day exactly how long that glee lasted. Maybe a week or so. I never got around to writing it.

Besides working in Texas Instruments in Dallas (the world’s largest semi-conductor manufacturer, oink, oink), I also was being treated twice a week by a noted shrink in Dallas — for my stuttering. He had me in one of his transactional analysis therapy groups for two years.

Soon after that, I was finishing up my journalism degree at North Texas. And building up courage to take a huge pay cut to switch careers and go into newspapers. And then, into marriage.

So…Yes, sometimes, Life just gets in the way of things. And writing about the greatest discoveries in one’s own life don’t amount to a hill of beans. To the world, that is.

When it comes to conquering one’s own fears, though, at some point down the road you can look back. And realize you’ve long had your life on quiet cruise-control.

And smile, when you read some story or something that reminds you of a time back yonder. In your head you were so close!

When eternal peace for all folks and all living things, everywhere, were within striking distance.

And you blew it!