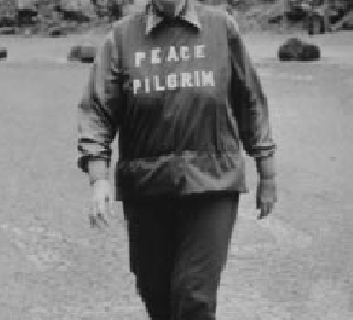 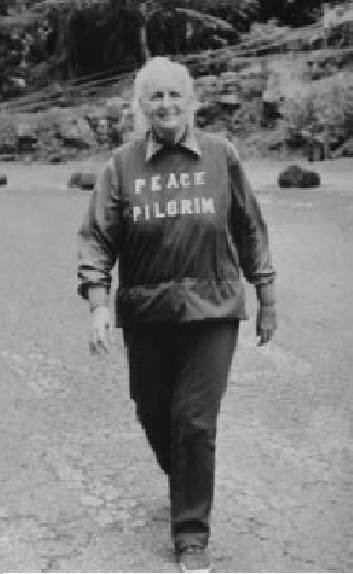 Peace Pilgrim as seen walking along a roadway in her Ministry for Peace. From 1953 to 1981, when she was struck and killed by a motorist in Indiana, Peace Pilgrim had crisscrossed the U.S. almost seven times — walking over 25,000 miles  —  to speak at community churches, civic assemblies and such on merits of peace — not just with yourself but with others, too. (Wiki photo)

This piece about nominating personal saints (idea arose from an internet story I’ve lost) first started out about Peace Pilgrim, an older but vibrant, white-haired woman I met in the mid-’70s at an Austin church who seemed to be walking everywhere wishing peace.

But quickly — conscience inspired, of course —  her topic on unselfishness spread upstream to two other women — my Mother and my Aunt Selma Howard — all dearly departed but whose contributions to my life at least were equally as important or even more so — physically especially — than this.

Thus, the problem quickly became, of course, one of length — much too long! So this story’s been setting some, yes!

But with Christmas Eve and the uniqueness, too, of Peace Pilgrim’s public ministry, I think it’ a good time to finish up this tiny, little footnote on her life!

She actually corrected an off-course selfish bearing somehow I’d set for myself coming out of college! Reversing it was an act that started me on the road to becoming a half-way decent human being, hopefully at least!

This awesome woman at age 44 ditched everything she had, including her name and all possessions — but one set of clothing with words “Peace Pilgrim” emboldened on it — and started walking highways across the U.S. as a “Peace” ministry. It started at the beginning of the Sun Bowl Parade in Pasadena, CA.

She had no organizational backing, carried no money, and would not even ask for food or shelter. When she began her pilgrimage she had taken a vow to “remain a wanderer until mankind has learned the way of peace, walking until given shelter and fasting until given food.”

Seems it was late Summer of ’75 on a Sunday when I met this wonderful woman. I was working as regional editor for the Temple newspaper down I-35 a ways; but had met and was dating a friend named Sharon in Austin (both of us Unitarian Universalists at the time). And she’d invited me to the First Church’s Sunflower Meeting for Singles that evening.

In both the general and breakout sessions, Peace Pilgrim was almost mesmerizing as featured speaker. It wasn’t like rays of light coming off her face when speaking, but rather conveyances of feelings — from her voice, facial emotions, and warm touch of her hands as well — just kind, gentle, blissful fuzzies, ‘ya know. Humble, she was.

Just a few years earlier, remember, I’d come out of the Navy after logging four years in electronics as a radar tech. I had an idea then on makeup of matter! Hee, hee! Fellow radar techs aboard the aircraft carrier USS Independence often described me as dangerous!

And then, too, besides finishing Journalism undergraduate school, I’d been immersed in twice-weekly transactional analysis sessions for two years in group therapy with a Dallas psychologist — working on a speech problem.

So, yes, I’d been mentally primed to psycho-analyze any deep, deep “off-the-wall”  behavior or, rather, anything beyond the pale of society’s acceptable current running boards, then.

And — Oh, my gosh! –well off the simply good-person chart this woman was, too! What convinced me of the higher ties? Ol’ Bo’s Theory of Existential Atoms!

I put together this theory whereby people with higher mental valences (electronic power indices) in their heads — aka mental power built up by religiously following the simple, unselfish biblical commands of Jesus Christ of Nazareth — not only could work spiritual miracles but also could answer questions lower-type earthlings like me hadn’t even imagined yet!

It was a formula for becoming a Raz-ma-dad power freak! But without discipline, it was impossible to reach — say, for the public at large. Saying nothing about keeping! Talk about a run-away skater on an icepack! Me then, yes! But Peace Pilgrim had managed such heights on what amounted to a totally selfless, religious pilgrimage, though!

Some of my own problems were easy to see. Austin and Sharon, for instance, had become higher callings for me after my first marriage crashed — after three months, no less! Seems like I wasn’t tolerant enough for my new wife.

But when the guys in the Temple Daily Telegram’s newsroom started calling her the “Fastest 45 in the West” — after she’d spent weeks on body-building — I put my foot down!

My way or the highway! my view was.

So…Mercy? … Yeah, too hard, I guess I was. She fled back to her parents in Dallas.

But the sparks of mercy Peace Pilgrim gave me as insights about God — the importance of love, caring and kindness for each other, FIRST (for life ain’t no “Me Show”) — started a “New Deal” in my thinking about relationships.

Whether or not that would qualify her as a miracle for Sainthood in the Church or not — and, too, what others think about it — is irrelevant to me, of course. She’s still right up there atop the compassionates and the unselfish, on my list!

Not a bad thought for this Christmas season, either.