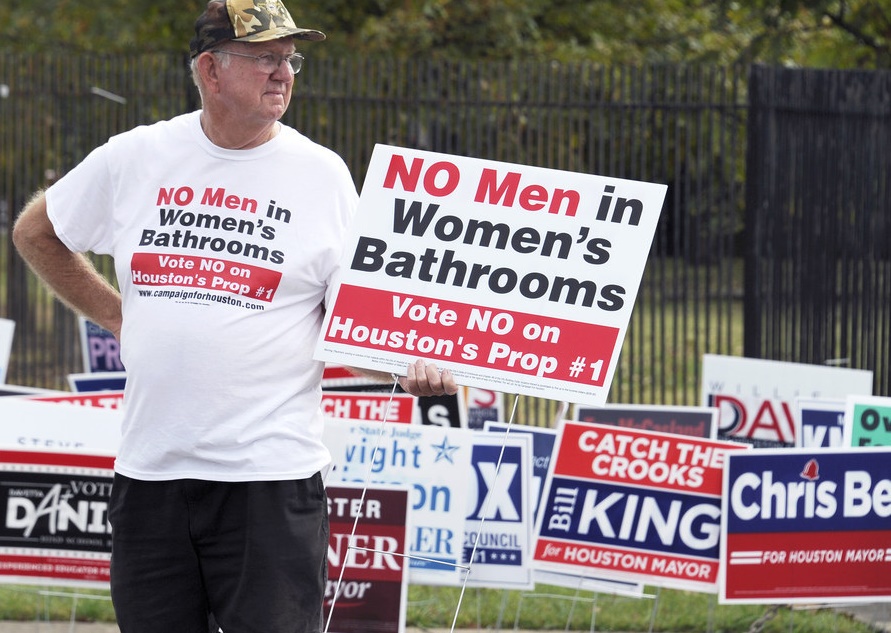 THIS WILL SURELY BE THE END!!! Pray, folks! PRAY!!! Pray that Houston voters today keep men out of ladies restrooms. Pray HARD!!! It’ll be the END OF TIMES if this thing passes! From Houston it’ll spread like wildfire! Devouring all of us! Shown above outside a polling site, a man urges people to vote against the so-called Houston Equal Rights Ordinance in early voting Oct. 21. ( Photo by Pat Sullivan / AP) –from buzzfeed.com/

HOUSTON — If what’s going down in Houston today officially gets on the books…Men, we’ve spent our manhood! Throw in the dice! The whole ball of wax! The hell with the towel! Games over! Neutering time has arrived! Prepare yourself for THE END!

Decades of sinfulness on one hand, weeping and wailing to counter it on the other; reformist damned and determined — like huge, cold-steel ice-cutters in the North Sea, relentlessly plowing ahead to break up ice; on and on and on — to shed every bit of decency in this country!

While on the other, the old-time religion bunch (us?), twists in agony of suspended, political neutrality — their kneaded crying-towel in their hands, twisting again, again…

And perhaps in dying gasps, finally mutters whispers of No, no, no!!!

This is a strange one, yes.

Along with regular statewide constitutional amendments on the ballot for Houston voters today, a thinly disguised initiative (dubbed equal rights reform law by the LGBT community) has spiced things up a little.

It’d allow dirty old men, who wanted to peep at women, the actual right to put on a wig, don some long-legged stockings, high heels and such, and march right smack-dab into a woman’s restroom!

Here’s how one reporter for buzzfeed.com described the scenario, while interviewing a Houston cab driver about this proposed new law:

“The equal rights ordinance?” the Uber driver said, making eye contact in the rear view mirror. “The only thing that I have heard is that it allows men who dress up like women going into the ladies room. I heard commercials that said it would increase crime. If a person woke up one day and said, ‘I identify as a woman,’ he could just go into the bathroom to see titties or booty.”

“What else could it do?” he asked.

Called HERO for short, the Houston Equal Rights Ordinance doesn’t directly address bathrooms. It bans discrimination on the basis of race, religion, national origin, sexual orientation, gender identity, and 10 other characteristics. Some of those classes already receive protections at the state and federal level. But with HERO in limbo while it’s on the ballot, gays, lesbians, bisexuals, and transgender people currently lack any discrimination protections in Houston — and covering LGBT people was a prime impetus for passing the law.

HERO covers jobs, housing, and in places of public accommodations — including hotels, restaurants, and, public restrooms. As such, transgender women can’t be barred from women’s restrooms. That is the point of friction for critics, or, at least, has exposed an Achilles heel for them to attack.

LGBT rights my hind leg! This ain’t normal stuff, folks! If’n we tilt to the sexually different, what else is there to hold onto? Huh?

Don’t just wave the white flag, good folks! Stuff it in the commode with all the other waste these people have boxed us into, and git outta here! RATT NOW!!!

Oh, well — in my case, an old retired senior on fixed income — no, no, not now. Can’t do it! It’ll have to be the end of the month — when my next social security check arrives, ‘ya see!

And only if I can afford a bus ticket!

All my money from this month’s check already’s been spent; times are so bad. On ever- higher mortgages, taxes and stuff. You know!

But a cesspool these people don’t want us living in!?!! That’s what you’re saying?! That’s the push-back?!

Hey, bad experiences (ad infinitum), is really what the LGBT community is a wanting from us, right??! Payback!!! And they’ll go to hell on earth to get it!a Right?

TO THROW IT RIGHT IN OUR FACES!!!

Or at least that’s one side of this entertaining argument.

I’ve written some on this before, yeah. If you really want to see what some of these LGBT people want to do to us, for example, read here what happened to me in San Francisco once.

Maybe some man now wants to do it to a woman! It ain’t pretty.

But today, pray for Houston!