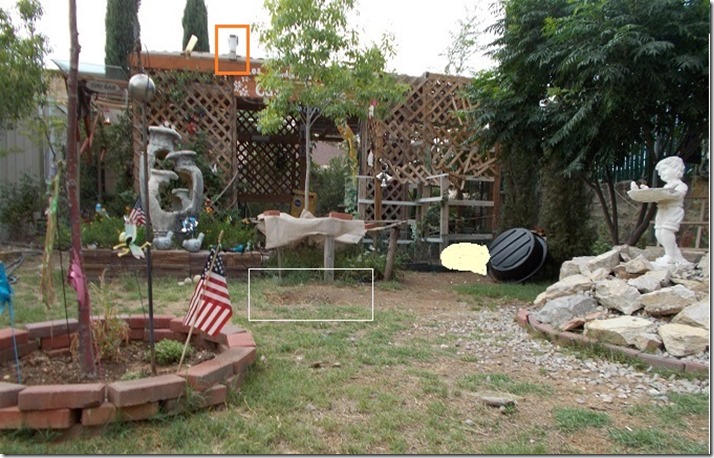 The Scene: This is our garden, looking from behind our bedroom window toward the rear of the yard. Note the position of the lamp (in orange rectangle); and the ribbed bottom of an old pond tub to the right. The shaded white area beside it is what sure appeared to be an oval object with glowing lights. A UFO? Not a drone! The little planes don’t glow! The hole referred to in the story is just beneath the center tree framed in a yellow rectangle. That’s where I’m hoping to build my turtle pond some day. (DB photo)

EL PASO—Yeah, people do crazy things. I’ve done plenty. I’ll do plenty more. But I don’t think I’ll ever attempt a citizen’s arrest of an Unauthorized UFO landing in my backyard again. Too dangerous for an old coot! A little bit of rain in the desert does some strange things to people, yes. This is one of them.

Much of El Paso saw rain or thunderstorms Sunday night. I didn’t exactly sleep thru it, but… Sometime about 2:30 a. m. Monday, I awoke. Alert! How come?

Got various lung problems, for one; sleep under one of those sleep apnea’s CPAP breathing machines, connected to an oxygen generator on the floor.

Wife hates both of them. Make too much noise! I toss and turn a little, too; plastic tubing does get kinked some I reckon. Straining the machines; more noise it makes.

So? I can’t hear anyway now, very little; extra noise from the strains usually doesn’t bother me. Mostly, just appreciate the sleep. But waking after an hour or so isn’t unusual either. Just drift back to sleep, it is.

But this time it wasn’t the tubes though. Quickly sensed something else. Wide awake, the eyes were! 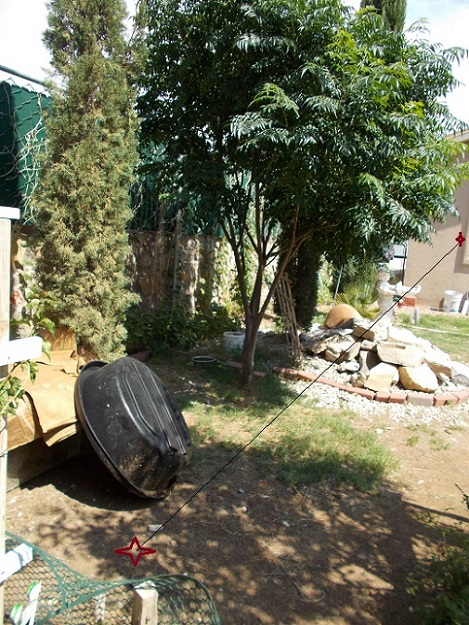 EYE SPY! At the back of the house you can just see the frame of the bedroom window. From there, the white glowing object appeared just below and a couple feet behind the pond tub. (DB photos)

My side of the bed in the bedroom faces the rear window. With the fluor escent light of a garden lamp mounted atop the front of a rectan gular, wooden gazebo near the back of the lot (seen in top photo), I’ve got a pretty good view of our backyard garden at night. Yáhoo sentry, I am.

I looked out on this occasion. And damn if there wasn’t a large spot near the ground out there that was glowing! Pinkish-white! Appeared to be off to the right some, of the gazebo!

That looks like a UFO just landed! was my initial thought. Damn, it’s a small one!

I quickly put on my slippers and started for the door. Thought about calling 911, but decided against it. Need to check this out first!

An unauthorized landing of any spaceship in one’s backyard, whether it’s a government drone or an unidentified flying object from true outer-space, is an affront to someone’s right to privacy. People get a little riled that way; oughtn’t do it to them!

Noemi was awake by this time. And wondered where I was headed.

“There’s some strange light out there in the back yard, see it??!”

She lifted her head and saw it, too. A glow from some object on the ground. Near the east-side, rock fence.

I was already down the hallway and headed toward the rear slide-door in our kitchen, on the west side – our only entrance to the rear garden. I jogged quickly the 20-30 feet down the side of the house to the northwest rear corner, and looked to the right around it, toward the back.

For the first time I felt the rain. Coming down in a steady drizzle.

And then through the drizzle, off shimmering beneath the rays of light from the gazebo’s garden light, I saw it. Still there.

Still glowing of sorts, too. Looked to be an oval shape. Maybe 2-3 ft. long; foot-and-a-half wide or something. The light was shimmering. I stepped off toward it.

Absolutely nothing in my hands with which to defend myself. Just something in my head, something that drives people – e.g., a person’s right to defend his or her own damn garden!

No more than just a few steps I took though…And I froze stiff.

While I‘d kept watching the light ahead, from off to my left, what sounded like the northwest corner of the lot, I’d heard a noise. And quickly turned – to see something small and dark scampering over the back wall.

Then I made another 10-12 steps, focusing on the light still. The rain in my face…And fell clumsily to the ground!

I’d stepped in a large hole from one of our failed landscaping projects, and quickly fallen — my slippers flopping in different directions!

Damn! Forgot about that hole! I thought, getting up slowly.

Pain in an ankle jabbed at me; otherwise, it seemed I was OK. Luckily I hadn’t fallen onto anything.

The hole was left unfilled after I’d taken up one of those black plastic, pond tubs ( seen below) and tossed it toward the wall.  I’ve never moved that thing, once taking it out of the ground last winter.

Noemi and Kareli had put the tub into the ground last year – after purchasing some kind of electric water sprout with lights on it that would do everything but work properly. Without a baby-sitter, that is. China or India, I think, made it.

After the first month or so, the novel idea that had started the project fizzled. And I left the hole there for a future project: My turtle pond! When I get around to it. 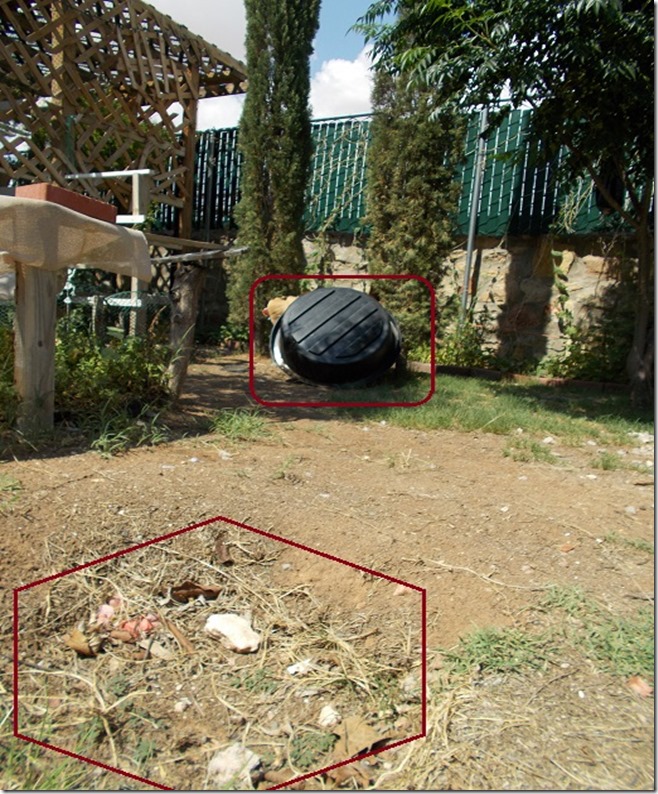 UFO Crime Scene: From the window, looking into mostly darkness, the UFO light appeared just to the left and slightly behind this overturned pond tub.

But if you ever wondered how India, China or one of these other countries could grow their economy so fast, start by looking thru the Bodines’ purchase receipts for the past 20 years. Gee!

One thing we don’t do though, is give up. On gardening! The hole is a testament to it!

But I’d sprained or bruised my left ankle some, too. I could feel the pain when pushing myself up off the ground.

But that wasn’t what bothered me the most then. I’d noticed the UFO light had disappeared! Getting on my feet again, I stared and stared. Mouth wide open!

I even stepped up underneath the end of the gazebo, a little wing addition we’d built; felt of the ground, the plants. Looking for a trace of evidence. Anything!

Something was here! I mumbled, somewhat chafed. Noemi and I both saw it!

Hannah, our little part-Chihuahua dog who’d followed me out, then started barking at me. My mumbling to myself had startled her.

And the rain was continuing. Still not heavy though.

Nothing to do but go back into the house, I finally thought. Everything’s gone! Guess it’s a good thing I didn’t call 911!

Noemi hadn’t been able to stay awake thru all this. As I walked back into the bedroom, she opened her eyes. And then asked what I’d found.

“There’s nothing out there!” I said. “I fell down, and it must’ve immediately taken off then! There’s not a trace of anything!”

We looked at each silently; then turned to the window, to look outside.

Slowly, I walked around to the window. Stared at it for the longest. Wheels were turning in my head, yes. I assumed Noemi was still watching.

“You know how — street pavements and curbs and things downtown (we’ve seen ‘em!) — sometimes will shimmer with light beneath street lamps? Right after a rain like this falling on’ em?” I asked, still looking out the window.

“I think that’s what we’re seeing here. Something like it. The bottom of that tub, with those thick grooves on it, has somehow captured those light reflections causing them to dance around a bit. Think so?

She didn’t answer me.

So I turned around to make sure she’d heard me.

I sighed. And… Then I went back to bed, too.

You ain’t supposed to figure everything out now, Bodeen! I muttered. Hell, you’re retired!

And I reached up and turned off the nightstand light.

With the rain outside, I slept like a baby, too.

And that light out there never bothered me again.