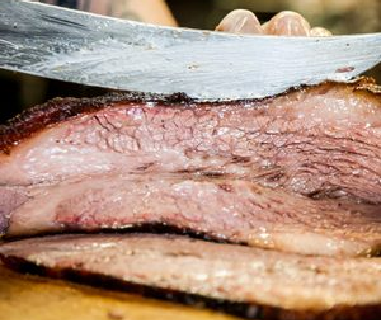 One of the worst things about growing old is adjusting to changes — especially when it comes to the way you order your food in a restaurant, say a BBQ plate dinner. The government doesn’t have a Memo Dept. that alerts folks to these things?

Noemi and I were in the mood for some good barbecue for our Valentine’s Dinner Thursday, so we went to that popular place near downtown across from the mall on the interstate.

Hadn’t been there for “several” years, yes. But, hey, it’s Texas BBQ, right? Can ask for sliced or chopped brisket plates, or sandwiches — along with a choice of fixin’s! In Texas we don’t re-invent no wheels, right!? Leave those things to California nerds!

But as we approached the counter that manner of ordering wadn’t on the menu on the wall above us, and it puzzled us some. With the line stacking up some behind us, I told Noemi, “Well, I know what I want, let’s just go on up and order!”

So I told the guy behind the counter waiting on us, I wanted a chopped brisket plate with sides of beans and potato salad. I assumed, of course, he’d toss in 2-3 slices of fresh white bread atop it, too!

Duh…He looked at me blank-face for a moment, then kindly told me, “We don’t have that!”

Behind him on a steel cabinet, someone had tossed a large brisket slab — and was slicing the hell out of it for an earlier order, I guess! Looked like he was keeping his piles separate after sliding them on weight machines.

pointed to the scene. “What is that!?”

The guy turned and looked behind him.

“That’s sliced brisket!” he said. “We sell it by weight! Eat here or take out!”

Again, that blank-expression moment. Then his jaw kinda tightened.

“No…No, we don’t have plates,” he replied. “We have hamburger if you want it on a sandwich. And the beans and potato salad — the sides — we can sell separately to you in paper cups!”

This time it was on me. I was d. No barbecue plates in a BBQ joint!

Then Noemi stepped in. And grabbed my arm. She realized the “Jethro Bodeen” in me was threatening a larger scene. “You want the sliced brisket sandwich, right? With potato salad?”

“Yeah,” I said. “But I want it chopped!” And I pointed to my mouth. “(Because of) my teeth!” The guy behind the counter understood, and nodded to her.

She asked for the sandwich “sliced only,” for her. And a side of beans

We’d already grabbed a couple of longnecks from the “drink section,” before we’d entered this “combat zone,” and placed both of them up on the counter for him . too.

He quickly turned to that stainless-steel table behind him and, with a butcher knife, raked to the side two piles of that sliced BBQ brisket meat.

And said something to someone about two pair of grilled hamburger buns, while he went to work chopping up one of the piles.

He took the two warmed buns, broke ’em apart, and laid ’em both out flat in a paper basket — exactly like the Dairy Queen we had in Cleburne as kids use to serve their hamburgers and french fries in. (No, it was different! These little baskets were made of thin cardboard; in Cleburne, the larger baskets were made of netted plastic!)

Using a thin, narrow slice of what appeared to be hamburger wrapping paper, he picked up my chopped pieces of meat and laid them on half a bun in one basket; and Noem’s “sliced only” atop a bun half in the other basket.

In the blink of an eye then, he slapped the top bun halves on his creations, grabbed a tray from somewhere to set it all in; and turned around and slid it all on the counter for us.

Punching in each item on his cash register, he then us the bill we owed — while advising us we could pick up plastic forks, knives and other condiments further on down the line.

For one, i the pre-Valentine 2019 era, these workers while preparing your order had always given you a choice of sauces to slop over your meat — e.g., regular, or “Sissy Sauce.” It was one of those enticing moments I was looking forward to before we came in.

Previously, I’d always ordered “Sissy Sauce,” because coming over from Presidio years ago the first time I didn’t — and the damn fire department truck didn’t get there fast enough to prevent major burns to my mouth

learned to avoid the “house” sauce! Yes, that “Sissy” stuff is delicious!

But before I could ask him, this time, about the missing sauce from the beef in my little hamburger basket, Noemi already had whupped out two $20 bills to pay the guy; and had me by the elbow saying, “Let’s go set down.”

And the people behind were breathing an audible sigh of relief and stepping up to the counter beside us.

So I walked off with Noemi.

And we found a seat and ate our Valentine’s Day dinner-in-a basket.

A regretful that, as old folks now, we don’t pay much attention to memos no more.