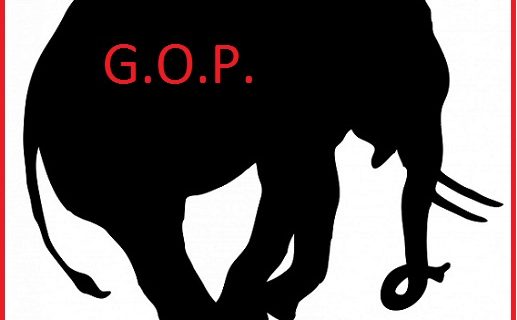 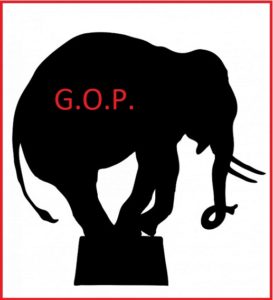 Dear Readers, it’s taken a while to grasp the GOP’s game plan, but here it is I think, staring us in the face — swept upon us by revolutions, no less! Past as well as ongoing ones. It seems the worst President Trump gets, morally, far-right Christians in Republican Party still swear he’s the best thing since popcorn! This is actually diversion politics! So, first, let’s call any short-term gains in his economy a Trumped-Up Prosperity!

And, yes, with a new conservative, far-right Supreme Court justice about to be seated, Trump’s backers see the end of Roe vs. Wade, too. Salivating over it already, some are. It’ll be the end of women’s rights! Back to the kitchen and an orderly world!

And in fact, with his hastily putting all this stuff together, one would wonder if even some of those supporters might’ve been preparing for End Times, too, no? In their eagerness, they took too big of a bite out of Dominionism‘s apple, maybe? Well…

Our age of heightened uncertainty, it is! A perfect time for new government, right? Presto, we got it! De facto plutocracy — Government by the super-rich, the corporate moguls. The exact words haven’t been written into a new Constitution yet – e.g., replacing Democracy – but it’s waiting, over there.

It’s in good hands while being rewritten. Corpocrats globally are fine, responsible people! And probably after the next presidential election (2020), Trump’ll sign it, too. Maybe beneath golden arches. After all, he and white, wealthy households already have cashed in on $30 trillion of total gains since the 2008 Repression! A salute, it’d be!

And the New Right’s revolution that’s behind us now — no battle shots fired for plutocracy, mind you – also has given us new, unseen leaders, too! (Oligarchy 101)

Oh, isn’t that nice! Us low-riders don’t have to learn any more names while heeling!

All of it accomplished just by throwing tons of lobbying money mostly at Republican lawmakers! After getting them elected!

The prominent Koch brothers this week — i.e., in addition to the $400 million they’d already said they’d be putting into political advertising for the coming midterm elections, announced they were forming a new political action committee to put even more into it — for candidates they favor, of course. Thus, corporations and their wealthy, major owners now rule.

Yes, President Trump was legally elected at the polls, most still say. But don’t think there’s not a new leash law in effect — albeit even for him, perhaps, only a transitory one. For now just note the corporate collar around his neck. One or two yanks by these mostly new unseen hands — He’s gone!

Liberalism for sure won’t get in the way; it’s dead. Kaput! An extinct, wingless bird plunging over yonder horizon now, it is. Equality be damned!

The boys and girls further to my left are even saying, Fascism is coming!

And to top all these distractions off, Democrats are so disarrayed they’re probably neutered, it needs to be said. Two years and they haven’t been able to do anything noteworthy, have they? Halted reversing Obamacare, maybe. For now.

What else? Immigrants have been routed! Many. Many more are in the process! For “Git along little doggie” has been tattooed in invisible ink on this president’s forehead! Despite critics uproar.

And new rules have rolled back protections for the environment, also. Lands once off-limits to commercial exploitation have been whitelisted — e.g., for desecration by drilling. Or mining.

And, too, automakers can use cheaper parts now to pollute our air more.  Less restrictive exhaust fume rules. A bonus rollback gift, no!?

So yes, it’s back to big-money, corporate exploitation again, Democrats! Just under a new umbrella. All delivered by what seems to’ve been a string of diversionary economies — including seemingly endless “terrorism” wars, too, don’t forget!

Your representatives have been relegated to twiddling their thumbs now, in case you missed the memo! They might as well step aside and spare us financing more official elections, no?! To Make America (Really) Great, again!

And all this time, to Trump anyway (despite this uproar), the economy says, Amen! The Trumped-Up Prosperity one! At least to those not reading tea leaves like I am, it appears.

The louder (or wilder) he gets in actions or words, the greater the applause from his far-right, religious base, no? What’s happening, people?

Where are the connections between being nasty (his behavior) and pockets of gold for mostly wealthy, corporate owners? While even the poor white in his tag-along religious faithful say, attaboy!

Indeed, this may be the most worrisome feature, readers! Few are discussing it, yes, but Trump is dangerous! May even be “the most criminal president in history!” You’re actually sleeping at night with no worries in your head!?

And the disgruntled Religious Right who gave him the reins to our government!? (Ah, for another time that is, yes.)

But what’s happening in large part – for those who haven’t realized it yet — is called “Snooker.” A game. You rivet someone’s attention on something outlandish, and…Ah, then reach back and steal their money! For tax breaks to the rich! In this case. Most of us will be paying for this next year in cuts to various social programs.

And there’s no one or no organization now that’s left with enough muscle to block them, is there?

Elections?! You actually think Democracy will help!? Fools, it ain’t there anymore! Independence needs currying constantly by an informed electorate! Corpocrats in 2016 finished what’d been an era of slowly taking it away from us! ‘Fess us! Your vote’s been bought!

Thanks to those who didn’t vote. And those snookered in the Religious Right, poor whites mostly, whose thoughts actually included, I’m guessing here, that by 2020, Judgement Day already would’ve arrived! So soon they’ll be in Heaven, walking streets of gold!

But instead (excluding nuclear disasters or such), reality expects those same potholes to be in front of their houses years more, my friends. There’s no public money to fix them!

And, too, expect the same egomaniac to be in the White House – the one, no doubt, who studies immigration law at night so he can stick an import tax on China’s tea in broad daylight.

As our world turns…

Ah…Blessed be all the children, yes! All of ‘em!