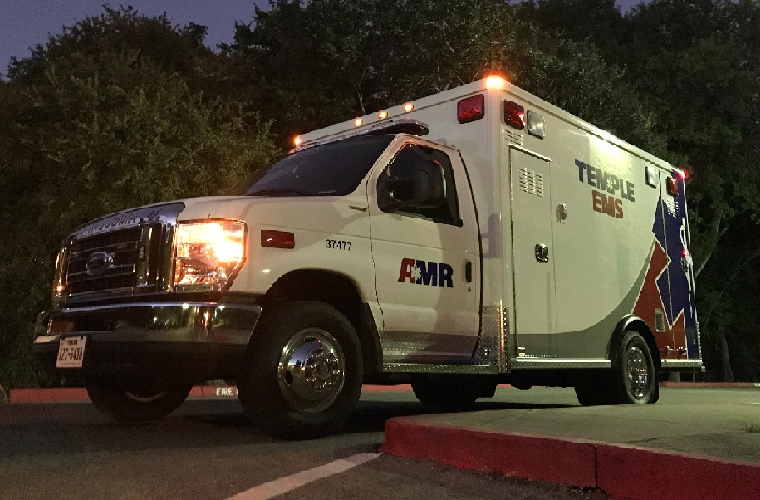 Emergency Medical Services now in Temple TX are being provided by a local division of American Medical Response. This is one of their Temple EMS ambulances.     (Facebook website.) 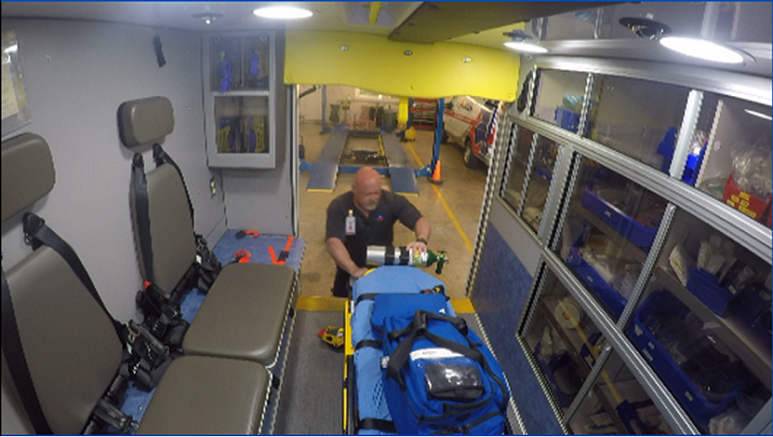 A Temple EMT checks out an emergency stretcher in the back of one of his department’s ambulances. (Photo Credit: Andrew Moore, KCEN-TV)

Sometimes it’d difficult for a senior citizen to admit that … (ah, cough, cough)…he or she is getting old. But you mention modernization of the field of emergency medical services in the civilian population, however, and here’s one ol’ boy who’ll gladly raise his hand to say he’s witnessed incredible change! The ’60s and ’70s were on fire with it!

And the changes — e.g., the old method when I was young; and today’s modern ones — literally are worlds apart! Yes, like night and day!

1) When I was graduated from a high school 30 miles south of Fort Worth, TX, in 1962 there were few if any licensed emergency medical technicians (EMTs) around — especially out of, or away, from your major big cities?!

2) Ambulance duties — Away from major cities mostly, emergency vehicle carriers, say, carrying injured from bad auto wrecks, were either provided by funeral home “hearses” and their untrained attendants, or by police vehicles; or — often — family vehicles themselves?! E. g., throw someone in the back seat, and off you went!

3) That no one among these (or at least, very few) were trained in on-site emergency medical treatment?! That is, people then ran out to the scene; just lifted up injured people from wreckage or from on the ground, regardless of their injuries; and usually put ’em on stretchers to carry back to the vehicle — and then to a hospital?! And,

4) Can you imagine the number of victims who died en route to the hospital or soon afterward then, because, for instance, an internal broken bone somewhere in their body pierced their heart? Or a major blood vessel somewhere (causing massive bleeding), or even another organ — all while being lifted or moved?!

Leave them alone until treated and ready to be moved were all still off the radar! In a few words, that was the big shift I’d noticed on how accident victims were handled in the field. In this new era.

Everything prior to it — on our nation’s streets and highways, e.g., basically “was just people carrying live bodies around with ’em!” as it was explained to me once. Or in many cases, live bodies who’d soon die. Or who’d bear the repercussions for damages in transit for the rest of their lives!

So a prelude, I guess this is then, yes. An introduction to another story — (hang on) which I remembered suddenly reading Pathos‘ “When did an ambulance become an ambulance? “Flashed right up in my head! Old times are not forgotten, no!

And if you’re shaking your head some, then join me in waving hands in the air and yelling “Hallelujah Progress“!

First, in the mid 60’s I vaguely remember the National Highway Traffic Safety Act was a big deal! Wrecks were considered just wrecks up until then, it seems. Medical services at the scene were thrown then in as duties, however! Here’s Wiki. (some emphases mine)

The National Traffic and Motor Vehicle Safety Act was enacted in the United States in 1966 to empower the federal government to set and administer new safety standards for motor vehicles and road traffic safety. The Act was the first mandatory federal safety standards for motor vehicles. The Act created the National Highway Safety Bureau (now National Highway Traffic Safety Administration). The Act was one of a number of initiatives by the government in response to increasing numbers of cars and associated fatalities and injuries on the road following a period when the number of people killed on the road had increased 6-fold, and the number of vehicles was up 11-fold since 1925. The reduction of the rate of death attributable to motor-vehicle crashes in the United States represents the successful public health response to a great technologic advance of the 20th century—the motorization of America.[1][2][3][4]

We’re here because of advances in ambulances and emergency medical technicians as additional services to traditional fire and police, so a Big One this is! Across the country!

But with Emergency Medical Services as an evolving industry itself, too, this is a much more complicated field. Check the above link; here’s a link for even more on it.

I can give some personal stuff, too: A bad auto crash I was in just before these new laws came — bad to me and my buddy, anyway! Was in a large metro area, though, so we never questioned how we were treated when transported. We escaped alive! Telling it will show why this is a subject dearer to my heart, though!

In late ’65 my friend and I left Texas A&M campus in College Station — as enrolled students one weekend — in his new Plymouth Fury headed for Dallas.

And ended up unofficially setting a new jump record at night — off a road I can’t remember, but near its intersection with S.H. 114 — somewhere in the old north-northwest Dallas vicinity.

I was trying to show Big Red  — a Valley rat who’d been my fish ol’ lady ’62-63 — how to get to his girlfriend’s college in Denton. But apparently I went to sleep in the front seat and was of little help.

It was an old cut-off road that ran thru Farmer’s Branch to the Texas Instruments plant in Richardson, where I’d previously worked — while living in Arlington. We were coming from that way, from North Central Expressway in Dallas, e.g. — generally northwest bound! Hoping to connect later to I-35E to Denton.

The road had a bad curve — almost a straight left-turn 90-degree angle — overlooking a motorcycle jump hill off SH 114, I think it was. Being asleep, of course, I wasn’t much assistance to him.

Big Red later told me the only thing he could remember was suddenly coming across a barrier in the darkness, and a sign declaring “15 mph,” and having to crash thru it. While looking down at his speedometer. It read “90.”

The unofficial jump record set on the below motorcycle jump hill we learned from the wrecker driver. Maybe a year or so later when we finally chased him down. He remembered.

Stared at us a long time, he did. Wheels rolling.

“Couldn’t find anywhere on that damn thing to hook my chain!” he said finally. “You two were in that?!”

I told him I’m certain Big Red was; that I ain’t sure where they found me. Still asleep, probably

We were in Parkland Hospital in critical condition for a while, yes. Broken bones, lungs, and other nasty stuff, concussions, etc.

Big Red even lost his voice for several years, until they found a Chicago doctor who helped him find it, if’n I’m remembering correctly. Something had cut his vocal chord!

So don’t do auto crashes, is the lesson we learned. Big Red’s girlfriend (later wife) never liked me after that, for some reason — wrecks are nasty! And thank God not only we survived but also we’re in a new era now with these improved emergency medical treatments.

In the old one, it was rougher.

After U.S. Navy service — Went in early ’67 — I came back home to Texas in early ’71 and re-enrolled in a university. And went back to work at Texas Instruments (Ti) in Dallas.

I finally finished my journalism degree in ’74 and then entered the media. Burning to write, I was. Drove southwestward out of Dallas some for about 2 or 2 1/2 hrs. on I-35 to Temple.

I remember basically my first duties at the Temple Daily Telegram south of Waco that year were on the police/fire beat, though. Typically for cubbies, these beats pound you with learning facts, facts, facts! It’d not typically a beat for feature writing.

But my curiosity about this change that was happening — especially as it related to my own wreck’s experiences — drove me! The beat became a learning laboratory for me. And opened my eyes!

Too, these literally were some of the best people I’ve ever written about, I guess — in my 20 years in newspapers. Wrote story after story on them. Their training. And their new gadgets!

Somewhere —Oh, the problems of multiple marriages, jobs, homes…and all the moving it involves over the years — I even have a photo of accepting an honor award from this bunch! “Outstanding Service to the Temple Fire Department,” it read. And was presented at the Temple Firefighters Local 846 annual banquet in 1975.

The Temple Fire Department — under the direction of Fire Chief Wallace Bearer a few years earlier — had taken over a division called Emergency Medical Service and staffed it with some trained firefighters who also were certified EMT’s.

These were the emergency medical technicians — who not only often when out on fire calls, too — but who always responded to auto or home emergencies with these improved ambulances.

This was the era when the rubber on the wheels of change really gained traction on the Road of Big Change in emergency treatments nationally.

And it’s certainly worth a big shoutout.

Millions are indebted to these people!