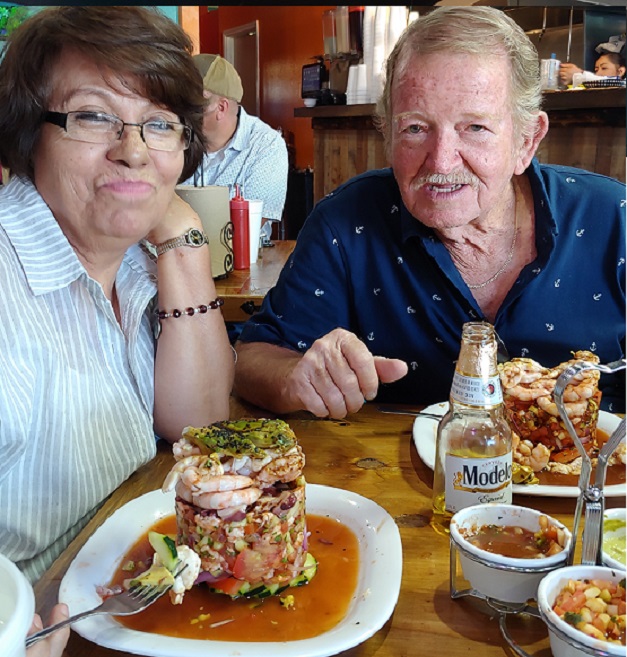 Noemi and Dan and, below, Maiya Kareli, all out in the Summer of ’19 to celebrate Father’s Day.

Welcome to our site!

On journeying to parts unknown! 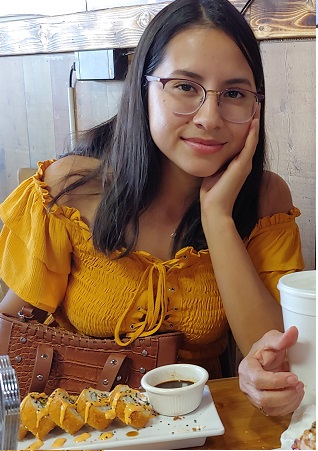 Hello, I’m Dan Bodine, former journalist who logged almost 20 years in the trenches of Texas newspapers once — before ditching it all and starting life and another culture anew 500 miles away, in Presidio, on the border, deep in the Big Bend country of far West Texas.

I ended up marrying the former Noemi Fierro (seen beside me above), who I’d sought out as a Spanish teacher for my work, but — thanks to God — managed instead to convince her to marry me. The most wonderful blessing of my whole life, it was! She’s always argued it was easier for her to marry me than to teach me Spanish! She became a few years later, too, a mother to our daughter — Maiya Kareli Bodine, now 19 (right, above). A true gem for both of us.

And (of all things, too, for me) I became that remote community’s sole judge, Justice of the Peace, Pct. 2, Presidio County — and supplemented my income as City of Presidio Municipal Court Judge.

And thru it all — in addition to life in the Catholic Church, even — the only other thing common in my life thru these transition years was plants. They have an even longer history with me! For I spent much of my boyhood years working after school at a plant nursery. They’re like family to me!

My second day in Presidio in fall, ’89, i.e., I went to a local variety store and bought the only plant I could fine — an Asperagus Fern basket — named it Methuselah (for my hope for stability), and it’s been with me since.  (Read on to find out more on this particular side of me!)

But I retired from Presidio County there in Presidio in 2009, after serving as Pct. 2 Justice of the Peace for 17 years; and, concurrently, Municipal Court Judge for the City of Presidio for 13 years. I enjoyed both jobs immensely — e.g., just helping people work thru various problems or stages in their lives.

But old age was coming on. And in 2010 our family moved to El Paso to be closer to health care professionals. Learned, i.e., thru V.A. Health Care (I’m a Vietnam Era U.S. Navy veteran, too), that I’ve got dementia — on top of lung problems also.

But this blog isn’t about my health; it’s about Life! It gets into some of my “raised in the sticks” home-grown philosophies, especially on conservative politics that’ve gone wild — as well as this passion for plants and gardens as a hobby.

I’m really weird on plants! Do you think plants have feelings, i.e.? I certainly do. They can communicate! A movement is afoot to increase their stature under the law.

In my little backyard garden — especially in the dead of winter when things aren’t too active in the plant world — I’ll go out late afternoons and talk to some, just to let them know Ol’ Bo is still here; still caring about them, i.e.!

Thus — as an off-the-wall political topic, i.e., — could Plant Rights follow Animal Rights as the next step in Humanism’s progressive revolutions? How does that sound?

Hee, hee! I stirred up enough anger in my journalism career on such evolution’s Quest for Peace thru Justice themes; I’ll be quiet (for now) on this new one! But, yes, I do feel it’ll be chompin’ at the bits soon. Post Trump’s era a ways, of course.

Noemi, my true soulmate to my strangeness, also is a former director of the Senior Citizens Center in Presidio. I absolutely could not be functioning the same without her.

And our daughter — Maiya or Kareli, who goes by two first names, depending on if she’s with family or a school group — attends the University of El Paso on academic scholarships.

She’s a ’17 graduate of El Paso’s El Dorado High School, and a true apple of her father’s eye — for soon she’ll be leaving her teen years behind and taking on maturity of early adulthood! Talk about strange new worlds!

Thanks for dropping by to visit us and we hope you’ll return often to check on us. With the health concerns, I don’t post often, of course. But I do appreciate readers. And their comments.