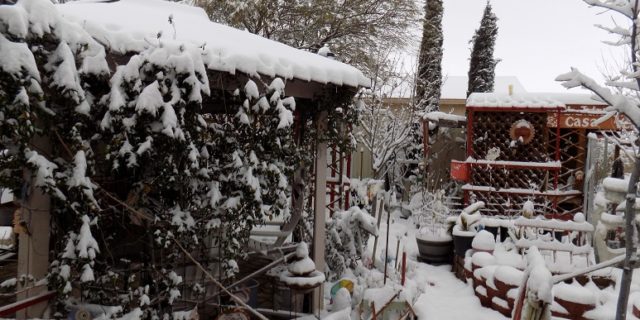 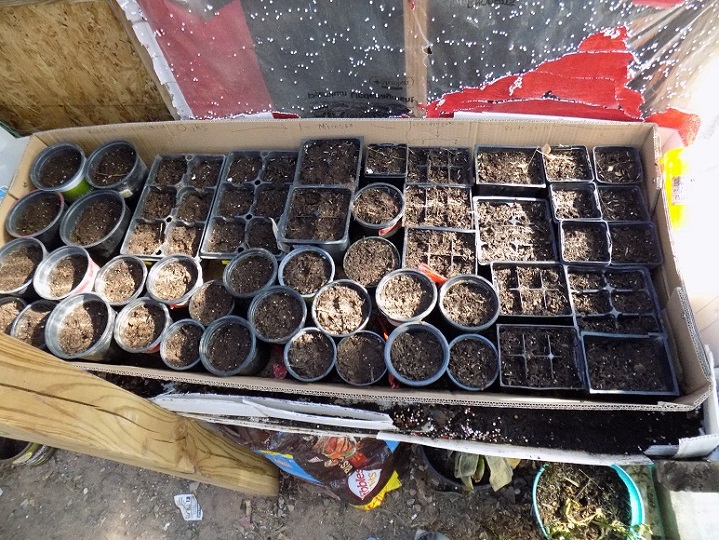 Ok, Christmas is over, yáhoo! So now let’s seed some new plants to put in this year’s new garden! A GOOD GARDEN we’ll have this year, right !??

Hee, hee! The old “Fools rush in…” meme was written especially for certain wild-eyed, yáhoo gardeners in the weather-change region of U.S. Desert Southwest — who grasp packets of plant seeds in early January in their makeshift greenhouses — shiny packets they got at a variety store month or so earlier, foolishly looking at a new, promising garden-year ahead. Oblivious to lessons of this region’s short springs.

Most of us are cognizant of those lessons, yes — it being but a tiny, largely suppressed awareness at this time, a flimsy reality, muted by a large Spring’s-a-coming excitement (as we carefully deposit seeds, say, into small potting containers).

The Real Reality of rooting seeds, though, in the Desert Southwest is a short spring that’s ahead of us in this zone, which usually means transplanting failures almost certainly lie ahead for us — when starting this late! But we didn’t listen to that tiny voice, though.

So…Hee, hee, fast-forward quickly now, Jethro! We’ve moved into the ground outdoors. The transplanted, tender roots on these new plants will not have sufficient time to “harden” enough — as protection against oncoming heat and drought they’re facing, even that barrelling down on ’em now already, with tomorrow predicted to be 98!

Jethro, my dear sidekick alter-ego, listen up! You know I’m talking to you!

Back in January, Tonto, there really wasn’t enough time left to root seedlings over the next couple of months (…ahem, Jethro, those we just got in the ground a few days ago, remember), for them to harden off — e.g., additional time needed outdoors once planted, to allow 2-3 weeks at least to acclimate, harden their roots some, before this oncoming heat assaults and destroys ’em! Entende?

In short, this short spring we’ve just had is just another of the bad quirks of living in the otherwise wonderful Desert Southwest! And it adversely affects us ol’ sleepy gardeners and our would-be plants! Capisce?

This compressed activity — e.g. growing plants to die — almost is like a discreet, annual ritual once sobriety sets into many people soon after the holidays, if truth be known. Or when clear-headedness rediscovers you, say, advising that the Holiday Season is over, finally.

Not long afterward, of course, it becomes an I-gotta-do-this-thing feeling, the first of a long line of wannabe spiritual payments to the Christmas Season’s passage, say, for which for various reasons has left you spiritually indebted  — and you having dragged them over from the old year into this a New Year.

By gawd I’ll create a beautiful world for God! is the usual yáhoo initial response!

And it’s done unaware — or unmindful of, rather — that this sudden burst of energy to manifest God’s splendor in your own little back garden (surreptitiously for repentance), is the same ol’ song-‘n-dance routine that springs up in your throat almost every January like this:

Forget the fact you should’ve started earlier — during the Christmas rush, say! For 8-10 weeks later in the Desert Southwest, with temperatures in El Paso suddenly mid to upper 90s already now, i.e. — you’ve realized your foolishness!

The song’s the same, but it’s a different verse:

But seems just yesterday there was Snow, Snow! 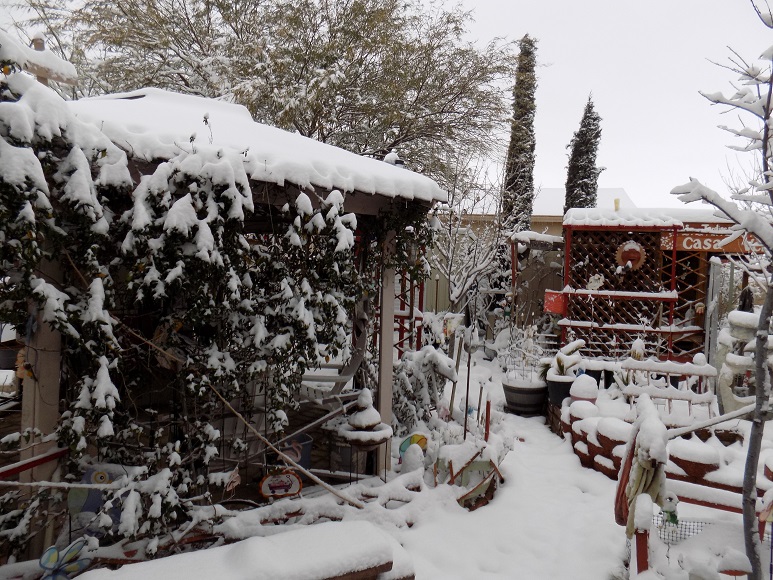 Cold weather of mid to late February or early March in El Paso Tx.’s mountains quickly changes to simmering heat by early May — meaning recently set-out bedding plants (from my unofficial calculations) have less than 20% chance of surviving even this month — much less the hot heat of June, July, and August! OK?

This realization that’s begun like an ol’ worm turning over in your stomach, springs quickly to your throat. And then you see the situation you’re in. And, of course, panic strikes! You started your seeds too damn late again!

“There’s no shade anywhere to set these little plants — to protect ’em?!?” is your first thought.

And then, for me, routinely it’s clearly time to lash out at that separate, alter-ego urchin inside, and git that blame offa ‘ya! So…

Maybe you’re not even aware you’re grilling yourself — scrambling to deflect wasted time and effort of growing young, tender plants (to then kill ’em) onto this alter ego — for panic of what mid-to-late May heat actually means has set in on you, big-time.

Jethro, that low-down scoundrel, is slower than thick molasses usually — but, too, I know full-well he’ll throw the first thing back at you that comes to his mind. I was almost to the point of even regretting I’d asked the question this time when he hurled this back at me:

And thus the new Garden Year begins! Have a good one everyone!

NOTE TO SUBSCRIBERS: Apologies for not having posted more, dear readers! Health problems continue, of course. But I’m a long way from next-in-line yet, I feel, with this disease. So with the hard part of gardening tapering off, look for more of me on the writing end in coming months. And thanks, again, for being here!