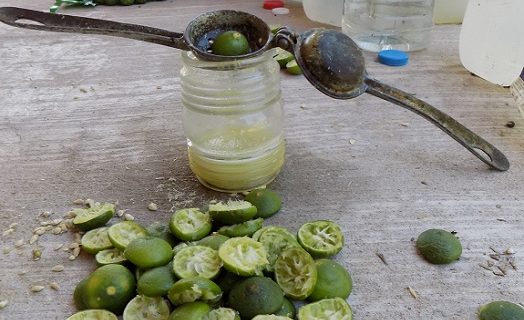 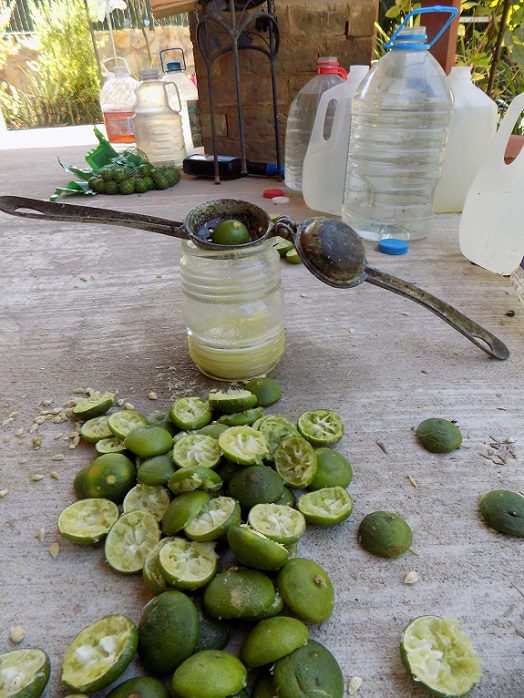 Squeeze those limes! Any of you remember these old lead lime squeezers you use to find in bars and even restaurants. Just drop that rascal in the cup and squeeze away! This one had been in Noemi’s family for years and years. I put a little oil on it and it hummed away! 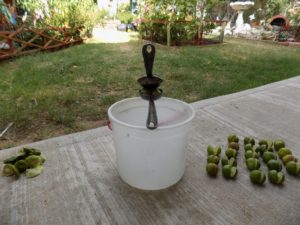 Limes for soil fungus? Yes. They chased it away!

Or at least, that’s what I think happened. As crazy as it sounds.

I mean, I had a bad fungus problem on some of my plants (yellow/brown, dying leaves; root rot, i.e.) And mixing the squeezings with a little bit of water — and spraying it on the plants – has got me (I’m hoping) on the pathway out of the forest!

But first, let me level with you on something: I don’t know beans about soil.

Except that I’ve worked in it for many years – first as a plant nursery employee during a large chunk of my boyhood years; later as a yard/garden hobbyist during most of my adult life.

Throw in, too, I’ve written tons of news stories involving the soil during my 20-year career as a journalist – quoting, usually, either county ag agents or U.S. Soil Conservation Service professionals.

How much of it can I remember? Not much.

But soil, to me, is more than “rocket science” though!

If you haven’t learned this yet, let me offer a simple description: Its makeup — e.g., all the interactions going on inside it — is more complicated than any 5-year-old you’ll find playing in it.

Which is why, on curing plant problems, there are more home remedies out there than there are hairs on a cat’s back! (Yeah, forgive me. I just had to throw that in.)

My problems in El Paso, more ‘n likely, go back to my overwatering my plants. Showed up late last summer in the backyard.

Yeah, overwatering is a common mistake. Me, too — Lovin’ ‘em to death! By drowning their roots.

“Mañana,” I’ll tell myself several times a week (at least), “I’m going to install an irrigation system and learn the proper amounts of water I need to be putting on these plants. At least then I can eliminate overwatering!”

Yeah, there are many of us in this boat. If you’re really into studying these problems, I’ll throw in this link for you.

And, too, I know when watering by hose you’re to gently and slowly let the water run onto the ground, near the plant, soaking the soil around it; and not splashing the plant leaves like old-school Aggies putting out a fire.

But having been alerted to the problems involved with watering — and actually being cognizant of them at the time you’re watering your plants — are (wait, this one is really going to surprise you)…two different things!

So, uh…Yes, like most people, I’ve probably helped bring on my garden’s soil fungus problem with improper waterings.

I noticed disease on some plants last fall. Leaves turning brown or yellow, falling off; velvet-looking splotches scattered about on the leaves — where you can almost see a minuscule army brigade mounting an attack!.

Little bit of web research led me to this unique (can’t be what everybody else does, right?) procedure of mixing lime squeezings with water, for both a spray and a drench.

Apply as spray to leaves, or pour into ground around base of plants as a drench — so roots can get a kick from it, too.

Here’s the specific paragraph I found describing the merit of it:

• Lime – Lime soil drench not only removes fungal infections, but also helps in decreasing the pH level of your soil. This particular soil drench is mainly useful for plants that are suffering from clubbed root fungal infection. Squeeze juice of 4 limes in a gallon of water and use it for watering plants. The same mixture can also be used as a spray for removing any other fungal infections on plant body.

Hey, there’s a lot of water in a gallon of water. You don’t want this mixture too thin! Not with desert fungus! Think about it. We’re always making adjustments in life, right! Blame it on the weather.

In the old days, one could pick cotton a whole day, and not drink more than a gallon of water from the jug you’d brought along, to keep walking straight! Lifesavers, they were!

So when did all this wasting water start, huh!? But that’s another story. Maybe I can whip one up on it later.

But here, we’re talking soil drench for plant fungus. So…Did the lime solution work? I’m saying yes! And it was noticeable in 4-5 days, too.

How often do you have to apply it?

I don’t know exactly. That, too, may be determined by the makeup of your soil.

Monthly, here in the desert?

I applied it in January, then left the plants alone. So I checked my honeysuckles (not an El Paso recommended plant, no) yesterday, for instance.

Have been watering them once a week though, during this time. February-April, they looked good. Now they’re showing some yellowing and brown leaves again. So I hit ‘em again with a throw-together.

Probably an application once a month in this warmer weather would be good advice, I’m reckoning.

I’ll welcome any comments. That story linked above mentions several other home remedies, by the way. But I went with limes.

I’ve suspected low pH for a long time here. A lot of caliche is mixed with the sand in my soil. And it’s chunk rocks, too! So I went for the fences!

Will advise you of results later.

Reader Note: Pardon me for the long dry spell in not posting more. I’ve been fighting some health problems, yes. Doctors have advised me one of them, Dementia, isn’t going away soon.

So maybe I’ll even write about it here. Lots of us ol’ warriors are fighting this disease. But I’m determined to write some more — so maybe while I’m taking a break from gardening… Just don’t expect a lot though, ok?

This is the only site I have now. I’ve saved some stories from the others. Probably will rewrite them and run ’em again, here. Also expect some “along-the-way” war stories occasionally, too. As well as just general political ramblings.

If you haven’t subscribed yet and feel the urge to — There’s a box for your email address on top right.

And, too, as always, thanks for being a reader.