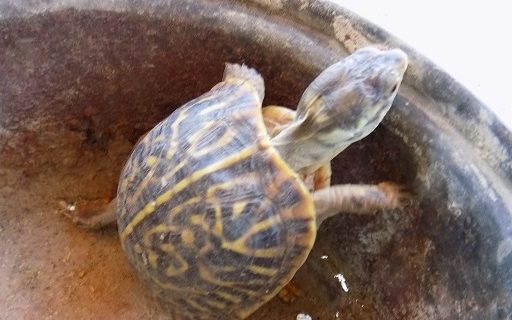 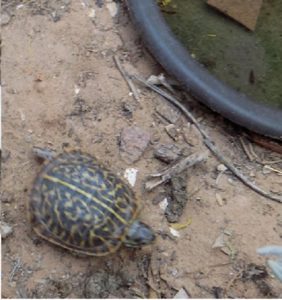 What kind of garden is this!?! Decent girl can’t even find a private place to sunbathe! (Desert Mts. Enterprises photos)

A rare event it was yesterday — I was able to photo one of my two “box” turtles, a young girl! Even tho I had to rough her up a little. Bothered her, I did, bless her heart!

Isabella, what I’ve now identified as what appears to be an Ornate Box Turtle thru a little research, is about a year-and-a-half-old, Kareli and I — and two of her friends — all were told last month when we all went to a guy’s house in northeast El Paso to pick up a “slider.”

I’d seen a “free” notice posted online somewhere for it. I think the guy felt so bad for luring us over for a common box, he threw in what I presume is her father — a male box he said was about 5 1/2 years old.

He’s Duke (no photo yet), so ugly, he looks like an auto hit him and dented his shell! But in the desert Southwest? Nahh! Box turtles are box turtles!

But both of these, I assumed, the man found that day in their “regular” hiding places in his back yard. And box turtles love to hide!

But this guy was still adrift in his slider cloud.

“They see a little water and…Zip! They slide right in!” he said, making the sliding motion with his hands. “That’s why they’re called sliders!”

Kareli and I were behind him, just shaking our heads in disbelief. A box?

And back at our house, eventually, I freed them from a large, black, pond container we’d finally settled on putting them in, temporarily. Being an old softie, I knew as boxes they’d be happier “on their own.”

So I fixed a little “watering hole” for them (that I’ve relocated a couple of times, I guess intuitively thinking they keep moving their hideout); and continue every 3-4 days to bring out a large plate of lettuce or something for them to eat.

A practice that’s a bit strange in itself; for it’s always gone by the next morning, regardless of the location. Someone‘s eating it!

Now, I’ve seen “Duke” — the older one — several times since Day One, just out strolling for exercise, I guess. But I never could remember to take a photo!

Isabella is harder to spot! Only a couple of times. And zip! She was moving on!

Yesterday when we were on the back porch installing a ceiling fan, I just happened to glance at the water dish in the side bed — and grimaced in fear!

In her water dish — and floating on her back, e.g., her stomach side up — she had one arm thrown over the side; and all of her frontside appeared almost “white,” and “puffy”!

“Oh, no!” I thought. “Something’s happened to Isabella! She’s dead!”

Gingerly I reached down and thumped what I thought was her dead body.

I did it again, a little harder.

After a few seconds, finally the arm extending out over the water-bowl rim — her left-side arm  — jerked a time or two.

A few seconds later, a bit of protruding head that was showing moved — almost like…Whatever was in there was awakening.

What the hell is this!?! I thought.

Then I emptied everything on the ground, Isabella, water and all!

She came up mad as hell!

“What!? Can’t a girl sunbathe without being ‘bothered’! What kind of garden dump is this?!!” I imagined were her words. Mas o meno.

But before answering the insolent creature, Get a camera! Get a camera! were thoughts screaming at me! So off I dashed to the study! 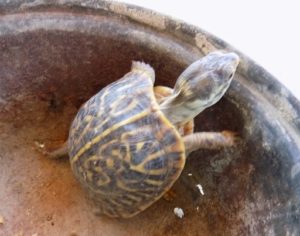 Yeah, yeah, yeah! I got my fill! Now let me outta here!

And returned, just barely in time — to see her disappearng under a plant!

Even was able to grab her and put her in an old, dry pan we use sometimes for feeding the dogs.

And fed her a good portion of dried worms. Before impatience hit again!

After lifting her out,  “the girl” hoofed it on out of sight! Again.

4 thoughts on “Can’t a girl (turtle) sunbathe without being ‘bothered’?!”