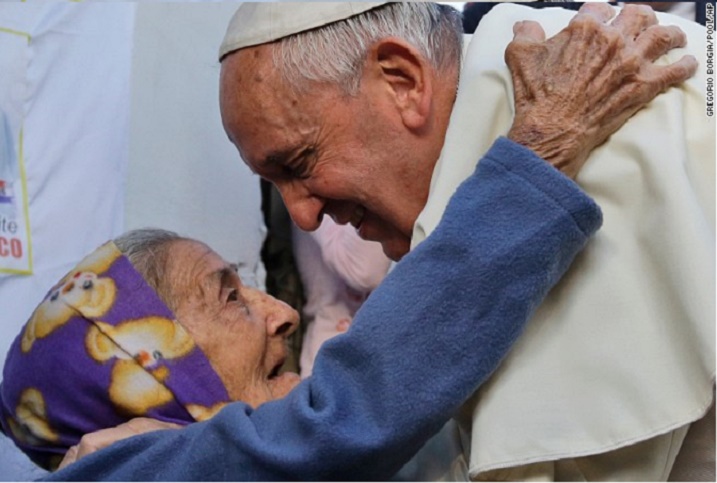 An exuberant elderly woman greets the Pope Sunday, July 12, in the Banado Norte neighborhood in Asuncion, Paraguay. The Pope was in the Americas criticizing radical capitalists and the newest worship-of-money idolatry that’s come down upon the backs of the poor, he claims.                (Gregoria Borgia / Pool – AP photo)

The world’s getting crazy and crazier, no?! Could it be we’re going back to Square One? Finally? Or are we in for a revolution from the right first? An armed revolution?

Pope Francis, while touring South America now, is on a climate change and environmental roll — decrying adverse effects of unbridled capitalism and what this newest false-worship-of-money practice, another idolatry, has meant on the poor, and the world’s environment!

And his messages are the stuff of Hollywood movies — the good vs. the evil. One California actor, in fact, may already be honing up for a role in one of them by now! Or at least one might surmise that by reading the news. What wasn’t reported, however, was how my ol’ sidekick, Jethro, got involved and created an embarrassing scene in all this. Let me share some of this with you. 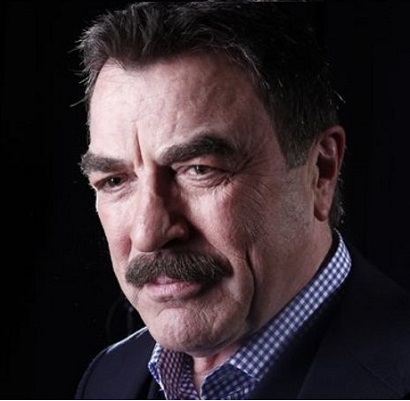 Film star Tom Selleck: Says the settlement will stop all the uproar and allow him to get back to his family. (AP File Photo/Carlo Allegri)

California’s well-known water shortages – more and more critics are saying in the wake of the Pope’s stepped-up, environmental crusade now – aren’t just the result of a severe drought. It’s linked, too, to the state’s gross abuse for decades by the state’s wealthy and those who consider themselves privileged.

‘Magnum P.I.’ star Tom Selleck, for instance, noted for his strong roles in law enforcement, no doubt is feeling he’s unjustifiably been targeted. With severe water shortages, he’s got himself in a public crossfire. Involving trees on his ranch!

A long-time owner with his wife of a multimillion-dollar, 60-acre ranch in wealthy Ventura County near Los Angeles, he was accused a few days ago in a written complaint of stealing truckloads of hydrant water on several occasions, from another water district; and hauling it back to his ranch to keep his avocado trees alive.

Whether guilty or not, the publicity of being tainted not only as an alleged water abuser but also now as one of the state’s exceptional privileged class, too, apparently was too much! That’s the point poor ol’ whiner, Jethro, got so fired up about!

Selleck, claiming he was unaware he was even breaking any law, quickly agreed to a settlement in the case Friday — which more than likely means he’s willing to pay for the amount of water reportedly taken in the incidents just to calm the public uproar.

Apparently caught; he’s coming clean, one argument is! Details of the agreement should be coming out later this week; the water board meets today to act on whether or not to drop charges.

“…Settlement of this unfortunate misunderstanding will allow me to spend more time with my family [now]…” is how he described it, according to WaterWired.

Too bad, this is, in many other ways, too, Jethro argues.The Pope has chosen a wide-swath brush to paint many capitalist practices (and thus people), apparently as greedy and evil — irregardless of whether benevolence is involved somewhere.

Jethro (for those who don’t know my writings well, is my ol’ alter ego. He’s a rascal!) is a longtime fan of Selleck, and already was working on a new film script, planning to sell it and get rich off this faux pas in social branding by the Church, no less!

Hee, hee. I am Jethro’s witness that he’d promised faithfully to give 10 % of his profits to the church, too — even crossed his heart and hoped to die with the thousand needles if’n by chance he wasn’t telling the absolute truth!

OK, so what else was he supposed to do, Pope Francis?! Give even more?! Maybe ALL?!! While sticking the needles in his eyes?!!!! Hijole, what kind of spin are we in now?! Whatever happened to prosperity gospel!!?

To be honest, Jethro’s forever getting carried away in these “flights of fancy” of his. Don’t listen to him!  For it’s getting difficult for even me to know when he’s serious and when he’s not!

“Back off, Pope!” he wanted to name this script. Serious on this, yes. He’s even mentioned converting to the Republican Party!

And talk about a joke! Honestly, can you imagine Jethro trying to get the Pope’s ear? Huh?!

Well, he claims he finally caught up to him Friday in Bolivia. Making a speech to thousands of people, the Pope was. And he went after him!

“…[T]he unfettered pursuit of money” is nothing less than “’the dung of the devil,’” the pontiff lashed out, according to theguardian.com. (emphasis mine)

And “poor countries should not be reduced to being providers of raw material and cheap labor for developed countries!” the story reports he said also.

That’s where Jethro cut him off though.  Looking white as a ghost after failing to get inside an alter boy back stage — he’d slipped beneath the curtain on the far left end and was sauntering across the stage just like he knew what he was doing! Can you imagine?!!

Papal security personnel were coming out from all directions in just seconds. Scrambling out from everywhere! Where did this come from!?

The Pope was clearly confused as to how someone had managed to even get on the podium. But he has a reputation for taking on anyone. Even a white dust cloud! He doesn’t back down! He put up his hands to the security people.

“What is all this!?” Pope Francis asked Jethro.

“P-P-Pope, I’m just dying to know something!” Jethro started out. “You’re energizing the world with these speeches, ‘ya know!!! Against this so-called new greed?!…..”

The Pope didn’t look like he was even listening to him; was glancing around again. Maybe wanting to make sure he was absolutely safe. Finally he motioned with his hand to Jethro to continue.

“Does all this talk include California, too?” the idiot asked. ” You know, it’s the exceptional state! Out West along the Pacific there, yeah… T-T-There’s some people being treated unfairly out there in all this talk of yours! Y-Y-You know, in over 200 years there’s many of good, religious people in the U.S. who’ve been working their butts off, to make their country better! And have been r-r-rewarded for it financially…This is the prosperity gospel we’ve heard so much about!”

Was he attempting to talk down to Pope Francis? The Pope’s face got red; no telling what was going on inside his mind. His mouth was wide open.

Several people already started moving in on Jethro. But the Pope quickly calmed, and waved them off again!

“Ca-li-for-nia?!” he asked — rolling the word off his tongue like he wasn’t sure how something so foreign had gotten on there in the first place.

“Yes, sir! I got a good friend out there!” Jethro answered. “Owns a few Avocado trees, he does. And…uh…Well, y-y-you know, it takes a lot of water to grow Avocado trees! And…

Pope Francis’ face tightened again, and he muttered something almost inaudible, almost like how much water did the friend have or something.

“…W-Wh-What? Does he have a lot of water for them?! …Well, Pope, sure, he’s got his water rights alright, I suppose…Lives in a swank development out there – on a 60-acre ranch…Problem is…..It’s California!!! … ‘Ya know… More or less America’s food supply by now! Exceptional people these growers are! …Been doing this for years…YEARS and YEARS!!!

“I know about Ca-li-for-nia!” the Pontiff said.

Impatience had taken over. The Pontiff looked around again, maybe for a security guard he’d recognize.

Jethro knew he had only seconds.

Pope Francis cut him off with another question. Meanwhile an enclosing security person moved in and grabbed Jethro on what looked like his right shoulder. White stuff went everywhere! But the guard wasn’t about to turn loose!

“…Uh…Yes, sir,” Jethro managed to reply. The Pope had asked whether the rancher was wealthy.

“He’s gotten quite rich by now supposedly…Probably some off these trees have helped too, I imagine. B-B-But Pope…”

The Pontiff blurted out back to him then about type of workers, and it startled Jethro. From the Pope, this was? Racial profiling!?

Now Jethro was sweating. What in the world do workers have to do with this anyway!? The Pope just isn’t getting my drift at all! This is about a movie star!!

“Uh… This is the famous movie actor, Tom Selleck!” Jethro shot out, looking quickly around expecting everyone to gasp, or something, at the name. “In California, they’ve always made exceptions for movie actors! I mean, they keep the economy going out there!”

No reactions. Just puzzled expressions. Faces staring at him.

Damn! Jethro thought. These people look like they have no idea who Tom Selleck is!!!”

Then he realized the Pontiff was asking him something else. And this time he was angry and right in his face with it!

“…The problem?” Jethro repeated. “What is it I want?    … Uh …     Well, you know, this water situation’s been coming on for some time now! Governments tightening up on water, ’til…Well, you know…There are some real nice people, like Mr. Selleck here, who are being asked to sacrifice a lot more than just the common person… Yes, sir! It don’t seem fair! They’ve been providing jobs over the years…Uh-huh! You agree with that, don’t ‘ya, Pope Francis?! This guy’s giving them JOBS!!! Think you could help us out here some way?!”

Readers, I’m hearing about all this second-hand, you understand, from Jethro’s voice in my head. I was actually asleep while most of this was happening, and am slowly awakening.

But I know this is where the Pope started screaming what was needed was a cultural revolution, from the ground up! To change people’s way of thinking. The mindless pursuit of wealth was destroying the earth! It’s got to stop, he said!

And this is where Jethro then was abruptly escorted off the stage, too. People  pushing what looked like a white, crumbling cloud of dust ahead of them! Git it outta here!

But Jethro managed to fire off one last question. And it sure rankled the Holy Father!

“What about the Church, Pope Francis?! In the United States, we’re suppose to look up to the rich! But these wealthy people like my friend are accusing you of class warfare on them! What gives??”

Pope Francis was livid with anger!

“That’s the problem! Money’s become a new kind of devil idol for them!” he said. “Follow your catechism! Ejoli!!! Jesus Christ preached mercy to the poor, to those excluded from society! It is I who follow the Church! It’s not a fight against an enemy, it’s just catechism!!”

I think I need to ground Jethro or something. Imagine having someone like this around! So embarrassing, he is….Sure glad he didn’t give anybody my name! What an idiot! And people actually believe some of that stuff…??!!!”