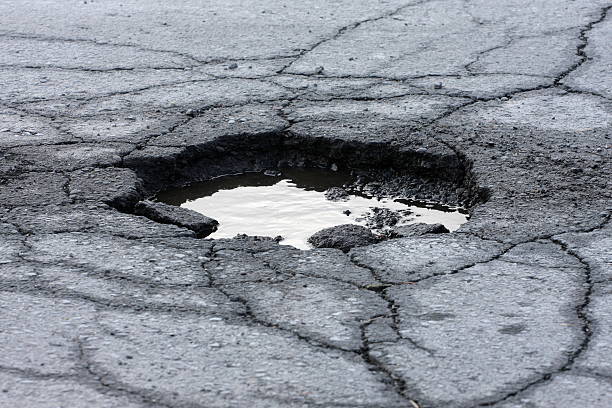 FRIEND OR FOE — Ever dropped your beer (or all your homework, your plate of food, etc.) when your auto hit a pothole like this? A small, troubled newspaper chain I co-owned once had this idea to draw publicity to a county reunion celebration … [Image courtesy istockphotos.com]

Lord, Lord, Lord! Cooking in a pothole!  Why didn’t the late Don McNiel and I think about this to capitalize on the City of Alvarado‘s road potholes, when we had that small, troubled newspaper there in the ’80s in North Central Texas?

Would’ve been better publicity to help the city, yes, and also for us, too, frantically seeking more advertising revenue! Our idea, instead, was a “Pothole Blues” song contest. That didn’t lift our blues much! 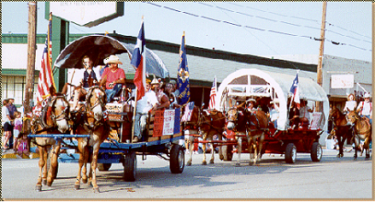 Don and I sponsored the contest one summer as part of the annual Johnson County Pioneers and Old Settlers Reunion.

It was a ballad idea that we’d hoped would both draw attention (and thus possibly more county funds) to a city street problem. Too, we’d hoped additional newspaper advertising would help us climb out of Chap. 11 bankruptcy also.

As it turned out, contestant entries may’ve helped the community laugh at itself some, but it didn’t stop our eventual demise! Maybe if we’d rented the potholes out in a massive Reunion BBQ Cooking Contest, say, we’d fared better.

Few months later we decided to shut it all down and stop the bleeding! Long divorced and with no kids, and with my truck packed, I hung a hastily scribbled cardboard “Out of Business” sign on the Alvarado Bulletin‘s glass door one weekend. And hit the road! Under the cover of darkness, it was! For a new life! Well into my late 40s then!

To somewhere 500 miles away! Didn’t even know exactly where I was going. Had simply answered an “editor wanted” ad in a state trade journal for a little paper in Presidio, TX. Agreed to it over the phone! And took a roadmap along with me!

Left there crying like a kid who’d lost his first bicycle, too! It’d been my first venture into the business side of newspapers, after all. And to go kaput hurt to no end!

Personal pothole blues apply the world over, of course. People so often launch themselves into new projects — be it personal or business — weaned, as they are, on new hope; only later to be broken by old promises.

We find a way for new life, though. Maybe like Johnson grass — to lighten things up a notch here — we aren’t the only species that can run its fingers thru barrier cracks!

Maybe weeds came up out of the seas with us! All our lives in ways are histories of people fumbling with an evolution of ideas seeking more light — try reaching in there, poking soil loose over here, e.g. Or put a little money into that, or this here. Hope indexed to One-day-at-a-time pittances to Life’s Lottery of Continuation! 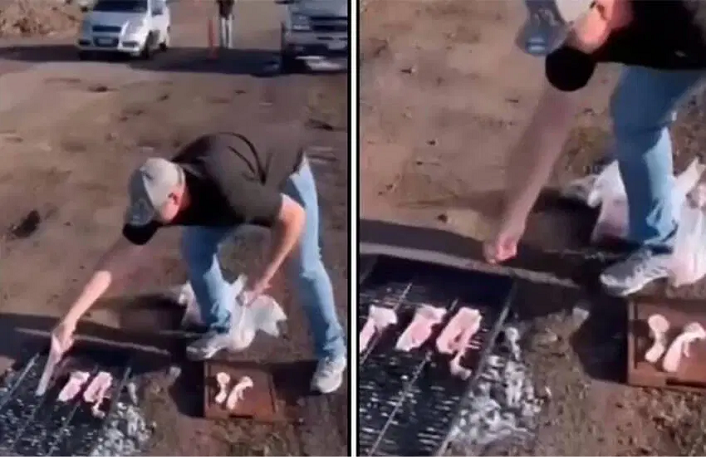 The young men with a butcher shop in Cuauhtémoc grilled meat over a pothole on the Manitoba Commercial Corridor highway and then offered commuters tacos. [Photo by CARNES HILDEBRANDT/INSTAGRAM] courtesy of Mexico News Daily.

This guy now in Mexico, i.e. (photos), has outdone many of us no doubt by laying a cooker across a large pothole and giving tacos away recently to drivers in Cuauhtémoc, on a busy highway, no less — a Good Samaritan maybe, yes, but also wanting to call attention to his nearby restaurant! May God bless him! He may be a keeper, as it goes in the vernacular of business startups. Hee, hee! Called “raking the brain for publicity ideas.”

A lot of us oldies now have been there; done that, yes! Hoping, in return — in this instance, say, to draw enough attention for local or state governments to do better road maintenance perhaps — as well as, yes, home-grown advertising revenue for his business! As cool as red-and-green Mexican currency!

The Alvarado Bulletin, furthermore, wasn’t just an historical paper but one believed to be the oldest business then in all of Johnson County!

Had been published for well over a century, but like most older weeklies, had been hit hard with circulation losses to expanded nearby dailies. And the rising cost, too, of newsprint on the printing end.

Don and I knew we weren’t in for an easy ride in buying the paper. But all-in-all, we’d hoped fresh wings in design and news coverage would give the Bulletin new lift. Years later we were still in a pothole, though!

So, like the guy in photo, Don and I weren’t just trying to dig publicity for additional street maintenance funding then. We were hoping sorely, publicity-with-humor might generate extra ad revenue to lift us out of our financial pothole, too!

Acquisition indebtedness almost always has been the bane of venture capitalists in these steadily declining print newspapers.

Especially weeklies needing costly offsite printing jobs. Ours was no exception! [Go here to better understand what the print industry is going thru now]

With Southwest Times, Inc., i.e., our little 3-weekly paper publishing company — if’n I’m even remembering the name correctly — we were constantly it seems shaking promotional limbs for extra advertising revenue. The “Pothole Blues” song contest just dropped from the skies! And like most of our other ideas, was deemed only marginal at best.

When the publishing venture would fail months later, I’d end up starting life over at a tiny weekly about 500 miles away, at Presidio. Along the Rio Grande river.

Fortunately, making new friendships and a new family out of it. No regrets there.

But making such a drastic mid-career decision like that, many old friends called just plain stupid! I chose to see it as a new opportunity, instead, and stuck it out!

Clearly the argument pitfalls in Life (like potholes in roads) are subject to rehabilitation, too. And we swung for the fences!

Putting potholes blues (our ‘ol song contest) into Johnson County’s “Old Settlers Reunion” decades ago — an annual event always held in August each year  in Alvarado —  was a good-natured idea, too.

It may’ve inspired some would-be musicians and drew a little more helpful publicity to the old community, I’m sure

As sponsors of the “song-writing contest,” we’d hoped calling attention to the city’s woeful potholes, indeed, wouldn’t just help draw more maintenance funds but would bring in advertising $$’s for us, too!

Hoping with the awareness also, Robin Hoods were increasingly scarce in state and county road-maintenance then. The late ’80s were unique. A pause, let’s call it, in maniac growth.

And through it all, Alvarado’s potholes were a constant fixture!

But none of all that stopped us! A sign of our daring? Situational stupidity? Both?

All irrelevant, I think now. As the old song goes, we “tried,” and failed, too! “Pothole Blues” became a good epitaph! There!

Pothole road worries, decades later — and despite other Sunbelt growth problems waning — still are a big maintenance problem for most communities, I’d imagine. Worsened by summer rains, of course.

And how are small community weeklies on the brink handling their own woes now, I wonder?

In our idea then, we advertised for contestants to write and record their version of a “Pothole Blues” song. Somehow relating it to their own experiences in life. We offered money prizes, of course.

And I remember Don and I (and seems like an advertising employee was there, too) all had gathered one evening in the office to listen to, and review tapes, that contestants had submitted — each of us doing our own ranking, of course.

The event was memorable just for the laughter the songs brought! I think the winning entries were played again during the awards ceremony at the Reunion. And subsequently on a local radio show.

I handed out checks to winners, and then ended up later chasing a sore loser through the crowds for a potty comment he made, I remember!

Overall, the contest was successful, we felt. Drew many contestants, and helped raise “filling potholes” a notch or two on the city’s priority list.

And, if’n I’m remembering right, too, may’ve helped bring in extra advertising revenue in 2-3 issues of the Alvarado paper as well, those issues prior to the week of the Reunion.

But our financial problems were so deep, we needed many more such promotional ideas to lift our drowning heads.

Same declining advertising-revenue problem hundreds of small, historical newspapers, nationally, have had to confront in the past 50-75 years, it appears!

Apparently, too, with few people concerned! A point that bothers me, yes. If’ you’re one of those who’ve never — nor ever will — spend a dime on newspapers, i.e., link these scenarios:

And even though the Sunbelt itself may be losing some of its luster (Climate Change‘s replacing it, believe it-or-not), Change itself is expected to be with us ’til…Kingdom Come, I guess.

So here’s to “still cooking” for remaining newspapers, those and their employees who’ve successfully coped so far with transformation in this new age of technology. Personally, I think they’ll continue. For a few more decades, at least.

Freedom of the Press — in whatever ways its construed or misconstrued — is engrained in our system as the third leg of government. Newspaper presses will continue to roll — at least into the foreseeable future.

Survival, after all — in some way, some form — is as American as apple pie! Go newspapers!!!