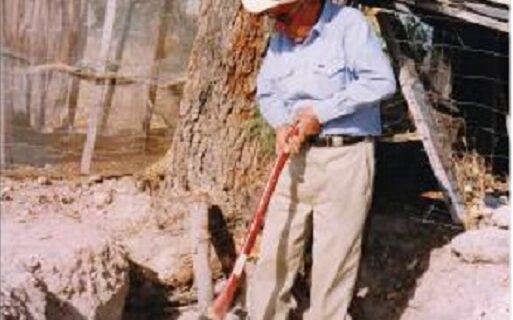 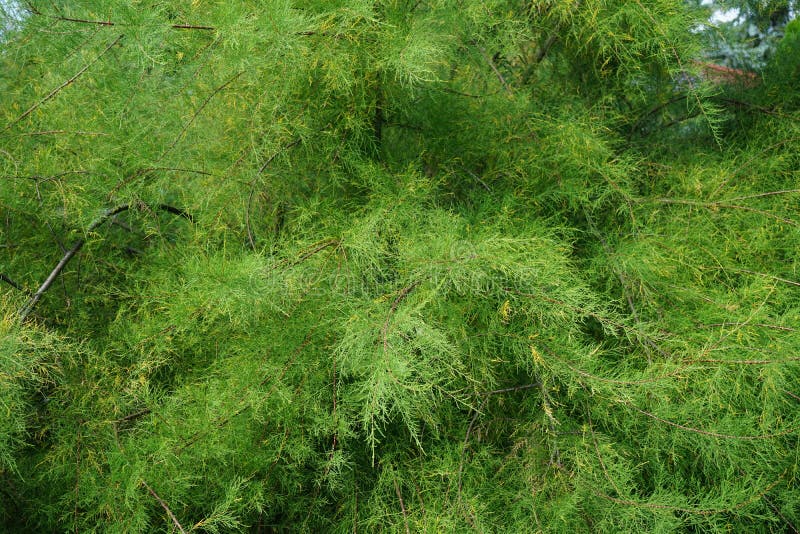 The Tamarisk trees — or Salt Cedars, as they’re mostly called in Far West Texas’ Big Big Country — were planted by the Corps in the early 1900s to help stop soil erosion in flooding. But in other times in the dry desert mountains, with their huge root systems, they’re also “water hogs”! This is a story of an angry neighbor wanting something done about a tree on an adjacent property he felt was “stealing” his plants’ water. [Commons Image courtesy of Dreamtimes]

This idea of a volunteer code ranger to arbitrate disputes civilly to improve neighborhoods is too good to be true, right?

Say, someone trained by the city to softly suggest to another neighbor, a yáhoo maybe, or a building owner, he/she ought to scratch their heads about yard improvements? Cuttin’ down trees, maybe? Cleaning junk outta yards? ‘Cause they’ve become an embarrassment? Or worse, hurting people?! And thereby unravel a potentially dangerous knot?

Hee, hee! Friends, there’re places this’s really happening! Sure ‘Nuff! And… I think it’d helped somehow once in a “theft by tree roots” incident I had once over in Presidio, too. If’n I’d only had it!

A code ranger, yes, is a new kind of neighborhood fuss arbitrator that’s been ushered into municipal government! A true Tennessee-type volunteer, they are. Into the flames! Hee, hee! Are the cities even paying for these folks’ life insurance policies?!

Open up, Religious Right! You got sting left? Here’s a God’s Call right smack down in ‘ya prayer plate! Sic ‘Em!

Indeed, maybe this new idea is working because there’s no badge, nor official, of any kind, staring at the would-be-accused property owner!? Avoiding High Noon showdowns and such, on what to do “with my own goddamn property”?!! Huh? Just a conscience thing! Me, you, the Almighty!

The idea of a neighborhood “code ranger” in all this conflab — e.g., calling a neighbor’s attention to possible city code violations — already has caught on in places. More ‘n just a few years ago, too! And I’m just late to the news.

First ran across it reading code developments in Fort Worth and other Tarrant County cities. And then found a link for it in West Virginia and Florida, of all places!

These trained, concerned citizens are actually helping alleviate eyesore problems and yard disputes, as code rangers! An unseen 5th Wheel in city government! Oh my, my mouth is salivating!

Anyone remember Fort Worth’s blighted East Rosedale Street in the east-central part of the city, say, 55-65 years ago, by chance? If not, you’ve got memories from somewhere else probably. And much more recent, too!

Neighborhood eyesore problems in general are older than the Mayflower! And nationally, we’re countering ’em, yes! But it’s in fits and spurts. It’s because law enforcement personnel hate them so much.

Here, i.e., is what police got into recently responding to a complaint of a black pastor watering another neighbor’s yard in Alabama: Mustard on their face! (The unusual is news, yes! But this was just an instance of being neighborly!)

So, yeah, neighborhood eyesores — and the counter narratives against moving on ’em — are the legendary lightning flashes for most communities that need cooler hands.

Tear all those trashy houses and tree messes down and make room for nice stores or parks! you might’ve heard at some city council meeting.

But people live in those houses! opponents would’ve argued. You can’t take people’s homes away from ’em! Make ’em spruce property up! Or kick ’em out on the street if’n they don’t! You gonna give ’em the money to do it with?! Room & Board somewhere while it’s being done, too?!

Or if not, and you declare it unsafe or a hazard or somethin’ and evict ’em anyway, who’s gonna take care of ’em?! And if’n they die from all of it, who’re their friends or relatives gonna take to court over it, huh!? You wanna step in all that?!

Lord, Lord, Lord, where’s my ol’ whiskey bottle!? Just the thought of all this makes my ol’ throat scratchy!

But, yeah, the program essentially trains volunteer participants how to recognize long-standing property violations, as well as how to softly notify the homeowner or resident of ’em.

Like releasing a peace dove into the air! It avoids any official involvement by the city. Oftentimes, yes, that’s the proverbial match that light’s the torch! But a peace dove can help those situations!

In Fort Worth, i.e., the good-neighbor visit resulted in the code ranger organizing regular visits by other neighbors to maintain the yard.

The lonely, frail old woman in the house, it turned out, had lost her husband, had a meager income, and there were no other options!

A Lord’s Call for Good Samaritans! it was. Americano a la mode! Sting ’em, Religious Right!

In Presidio as a contract city judge for years, nerves rattled at times, too, over clashing neighbors and neighborhood problems, I remember.

You never knew what or when a citizen or investigating officer was going to come in with a low-life worry — e.g., a person who just didn’t give a rat’s ass about where he/she lived! Nor what it looked like either!

It’s the reason (to me, anyway), every law-enforcement officer in Texas knows one thing for sure about neighborhoods:

“You can get shot for telling someone he/she’s gotta do such-and-such about their own damn property! Just ’cause The City or one of its laws sezs so!” Whoo!!!

Two Presidio cases, i. e., (neither of which were accepted for filing) stand out to me: 1) A woman repeatedly watering a rose bush on her side of an unfriendly neighbor’s concrete block wall once (which eventually, yes, caused it to sink and crumble); and 2) a damn Salt Cedar tree stealing water with its roots from an adjacent property owner. 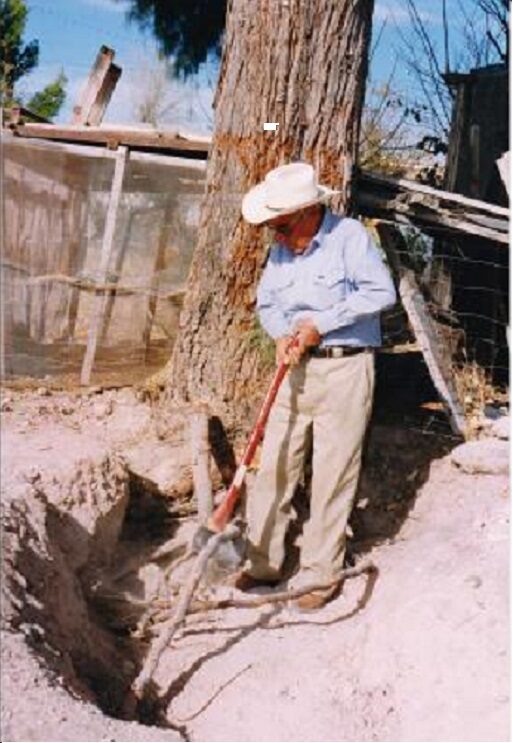 AS LAST RESORT: Presidio’s late Chico Urias, about 79 here, takes an ax to roots on his property of what he believes is a neighbor’s “water-stealing” Salt Cedar tree. The property’s hog-wire fence line can be seen running between Chico and the tree. (Desert Mts. Enterprises photo)

Now stealing water isn’t so unusual in Texas. Hell, we fight over it all the time, no?! I.e., “Whiskey’s for drankin’, water is for…”

What was so unusual about this case was the manner of the theft, though — e.g., Theft by Tree Roots!!!

The complainant, Francisco “Chico” Urias, had something of a civil environmental issue case, yes, I felt.

But it was prodigiously moral. There were no city or state code violations proffered, i. e. And remember, “We questionably act morally; we live by the law.”

A position I felt was agreeable to the complainant, by the way, who was 79 at the time all this went down, I think!

But my denial just didn’t seem right with him. The circumstances were obvious, he felt. And thus it lapsed into the eternal yawn of nothingness. Do we as a society need more civil laws?

Everyone in the whole cosmos — of those who know Salt Cedars, e.g. — knows they’re water hogs! Big time! To-the-Nth Degree kind! But can you prove you own all the water underneath your garden’s topsoil?

The Soil Conservation Service — so the story goes, yes, about 1900 or a few years later, maybe — brought these European trees into Presidio County and planted them along the Rio Grande not specifically for flood control, but for reducing soil erosion from those great washes.

And those ‘ol roots have kept much soil intact along the river’s banks! No arguments. Here’s a texasarchive.org link. i.e., of the massive Sept. ’78 flood.

Click on it to see what a monster the Rio Grande becomes in the Presidio area during monsoon season, when it’s flooded. It ain’t pretty, no!

And Chico was one helluva good person, too, honest as the day is long! As a grocery store security guard one night here in Presidio, i.e., he shot a suspect he thought was attempting to break into the store.

If this man told you something to fill a narrative of events, say, trust him, it was! He’d be right on it!

But I couldn’t help him in this instant.

Could a code ranger negotiator have been the answer?