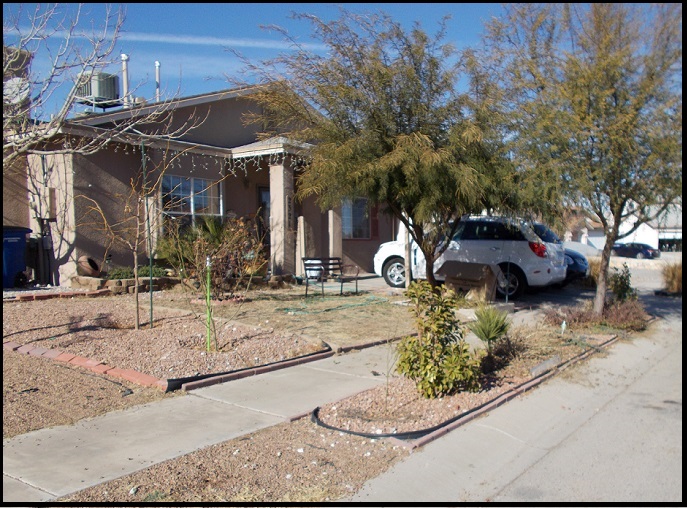 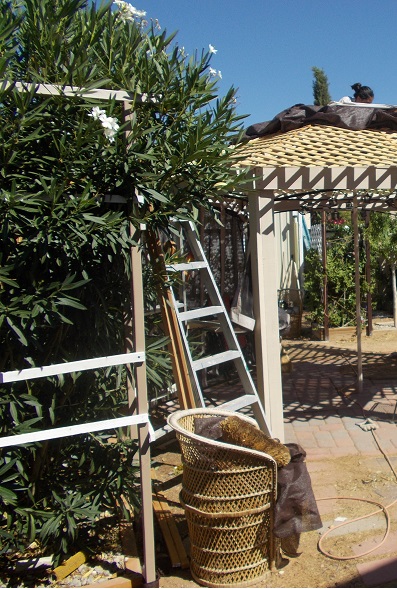 IN BACK: Setting yourself up to stop a jailbreak! [Desert Mts Enterprises photo]

Landscaping! It’s in me — But sometimes situations are a bit difficult! This is one of them: Removing Oleanders! They’re not for small gardens!

When we moved upriver to El Paso in 2010 from Presidio, i. e., the only plants around our house were a Western Catalpa in the front that’d die three years later from soil fungus, 4-5 tall cedars, and three large toxic, greedy Oleanders, all in the back.

Ah…Risks, risks, risks when you move into a new home! But disruptions in your over-the-hill days sometimes are like manna from heaven, though! There’s a pre-story here.

Noemi and I were late parents in life. Initially when we purchased the El Paso house, we were living downriver couple hundred miles or so in Presidio. With a daughter in elementary school.

I was thinking it more as retirement income. I was that old. But God and circumstances often work differently.

A tenant vacancy in the El Paso house 2 1/2 years later — I’d been retired well over a year then as Pct. 2 JP, Presidio Co. — coupled with Kareli ending her 5th-grade school year just before Memorial Day weekend, both came at the same time.

As well as some kinks that’d arisen with Noemi’s position as director of the Sr. Citizens Center in Presidio. Stressful for her, it was, yes.

And then mix in with all that, a couple who’d inquired about our house in Presidio a year of so earlier — somewhere in all this — reminded us, again, they were still wanting to buy it from us. If and when we wanted to sell!

Noemi and Kareli became excited. I was going to be out-voted before a final vote, I knew. And strangely, that didn’t bother me.

For from my background as a wayfarer in Life — especially in D-FW — I knew, too, something about moves, I told myself. And the thought of this one was different.

Mainly: “Gracias a Dios, this time I have a family with me, don’t I!” I thought instead.

“And also — Lord, go with us — this could be a final move, too! I can start gardening now! My hobby! Even on a narrow lot over there, rocks and all. I’ll figure out a way to do it!”

The decision to leave, thus, was made. Off and away it was for us. Our move in a handy U-Haul truck was four hours up some mountainous highways! To the Far East side of El Paso. To start over! Again.

When we arrived, surprisingly, two different adult neighbors came out to greet us. And, too, some kids got involved.

An older man, my age, even called his middle-age son across town to come help us unload. (To be truthful, it could’ve been they were so glad to see our former renters had left! [BP’d arrested father for being an illegal.])

No ley asi! In an hour here Kareli had made a friend with a young girl from down the street who’d stepped out to watch us, which drew another girlfriend from a few houses away.

And while we adults were unloading into the “new” house, she and her two “new” friends were walking the sidewalks talking, laughing, and making new friendships. In El Paso already!

“Wow!” I thought — noticing this (also while listening to Noemi and 2-3 other adults who’d all come over to help, all together conversing in Spanish) — “We’ve got friendly neighbors! Looks like this new move is gonna turn out all right!”

Somewhere during all this jabbing and commotion though, I paused to slide open the kitchen door and step into the back yard.

And saw the menacing three large Oleanders there. All coiled up in a row! And all the damn little “landscape rocks” around — not only them but around everything!

“Welcome, Stupid!” was the image’s message to me.  A stunning challenge! A recovering alcoholic, I felt the urge. Then shook it off.

“Just wait!” I finally replied. “You’re days in the sun are numbered.”

Left a nice enough cushion to respond, no?

And seconds later, I turned back around and returned to the house. And to moving in.

In the beginning: This entire neighborhood was Xeriscape design! Gardens, No! Not ol’ gringo kinds, anyway!

A new “eclectic” way to save water that’d become faddish in the mountainous desert Southwest region, it was! Maybe good; maybe not so good.

I’m old-fashion, and was reared largely as a youngster working in a North Central Texas nursery, and, yes, I like lots of plants!

Here — or in Xeriscaping, i.e. — tons of small, different colored “landscape” rocks are spread out widely on hardened soil, instead! A yucca stuck here, tall palm tree there.

The flat or sometimes inclining/declining, colored-gravel/topped curvature of ground is the base of an art picture! Fad of ’80s-’90s when a burning Southwest was going thru a water shortage, I think. That stuck! 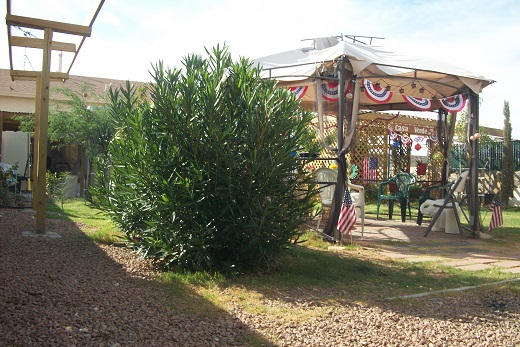 WATER HOGS: At Noemi’s July 4th wingding in 2012, the damn Oleanders and rocks thought they were the top-of-the-show! [Desert Mts Enterprises photo]

Xeriscape — yes, we knew, when we bought the house years earlier — meant less maintenance for us (back then as landlords).

Having to move in, though — e.g., cope with both the (#*@!!*^%#) rocks and the huge oleanders, too (sigh…) — soon tempered the enthusiasm of this new garden project Life had launched me into! Where do I start?

Oleanders, let’s say, have root systems that connect to China! Not lateral ones, of course, tap roots. Inch-by-inch digging, as an ol’ buddy and I in that nursery decades ago often thought, it so appeared! Thus I hesitated the inevitable. 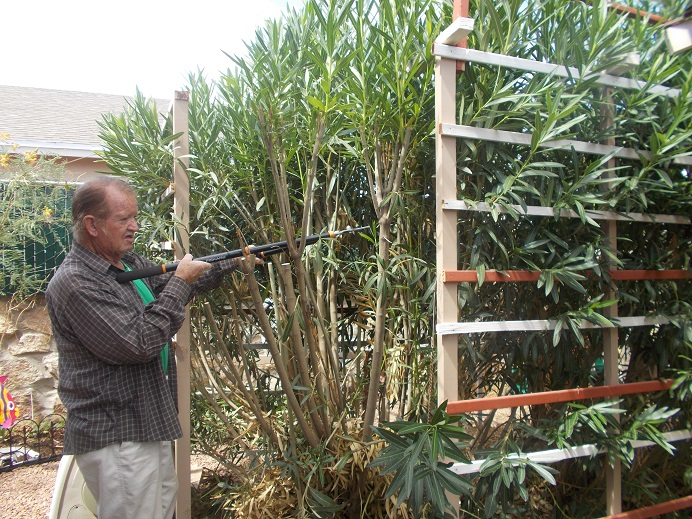 Naively also, the first few years I thought I might actually restrict this feeding habit, and restrain growth, thru more trimming — something you do to tall hedge plants, i.e.

Get those long-handled pruning shears out of their holsters, Jethro, and go, “Hup One! Hup Two! Hup Three!…”

To be honest, locking ’em up was an idea of Jethro’s, too! He suffers from too many hot days in D-FW’s sun, long before we came to Presidio — and has become only crazier since. 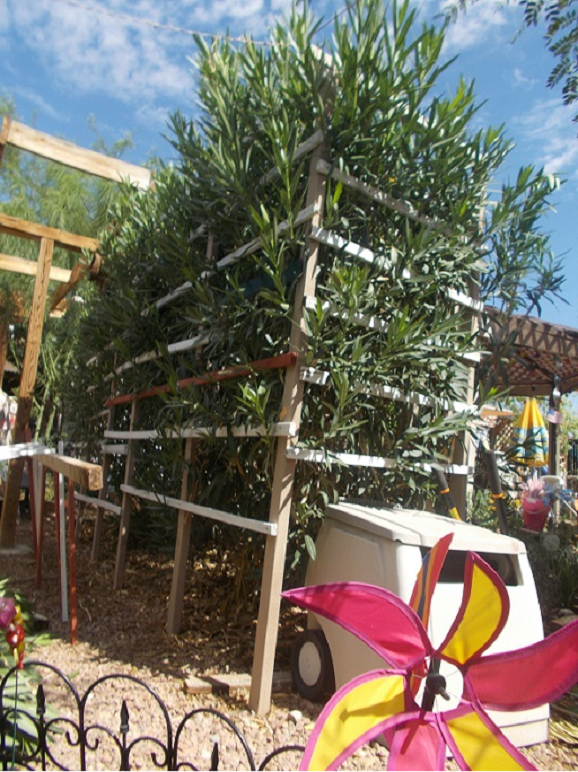 But, in a year or so poor ‘ol Jethro had changed his mind: Can’t incarcerate oleanders! you fool. Dumb as a sack of rocks! Maybe even dumber!

So what now, brown cow? I asked. 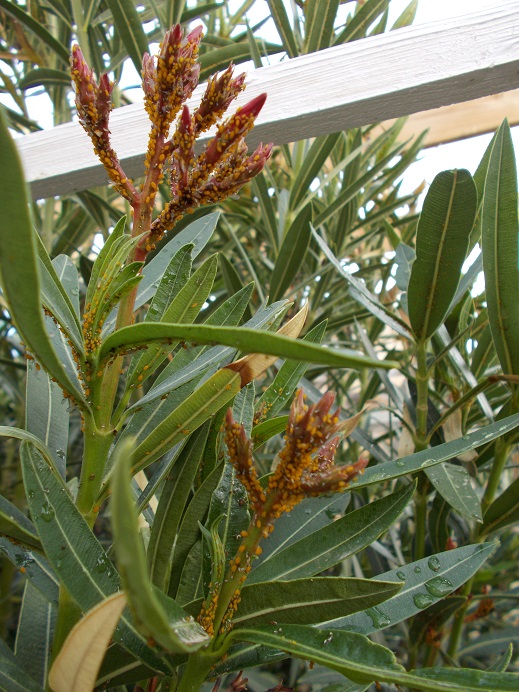 Fighting these insect problems on Oleanders wasn’t what I had in mind to be a gardener after I retired. [Desert Mts Enterprises photo]

Other issues that arose over the 3 1/2 yr. period I had the jail up ranged from constantly having to trim them, of course, to the aphids and whiteflies that settled in on their branches every spring — with each insect multiplying 10 times at least off the gummy stuff that grows on the leaves, it seemed. Consider the cost of fighting them! To buy and apply those insecticides! You’re in for a fight, mate!

And the desert may not be their most favorite place to be, but these shrubs are true hot-weather plants also, with roots so aggressive, each plant should be labeled a true “terrorist” before ever sold at a nursery! Just a  warning!

Don’t dare, i. e., ever set out a plant friend near one! Kaput! These lateral roots will suck it dry eventually! Double-label the bushes then as Water Hogs!!!

Indeed, Hell has no fury like oleanders searching for grub!

And remember how toxic Oleander leaves can be, another also — maybe not so much for the soil but if you have little kids, or something even like a desert tortoise rooting around in it. Which we do. It’s always a worry.

And, here’s another one: Planted together as a high wall, they block sunlight from other nearby plants, too, especially these desert low-lying ones! How’s a plant gonna rock-‘n-roll when it’s spine folds, huh!??

Add it all up, and Oleanders have a reputation worse than Jethro’s!

Dumb for tolerating all this? Guilty, I am! No doubt about it!

And early in 2018 I finally came to my senses! That 2010 backyard promise I’d made had found its way upon the cusp.

These damn oleanders have got to go! I said. So git a shovel, Jethro!

It took a lot of hard work, yes. But we finally did it! Pulled the roots of all of them up thru the rocks, after days of cutting branches and slicing trunks.

Below is the root ball of the final bush. And the hole left from where I got it. Desert landscape warrior, I felt like! 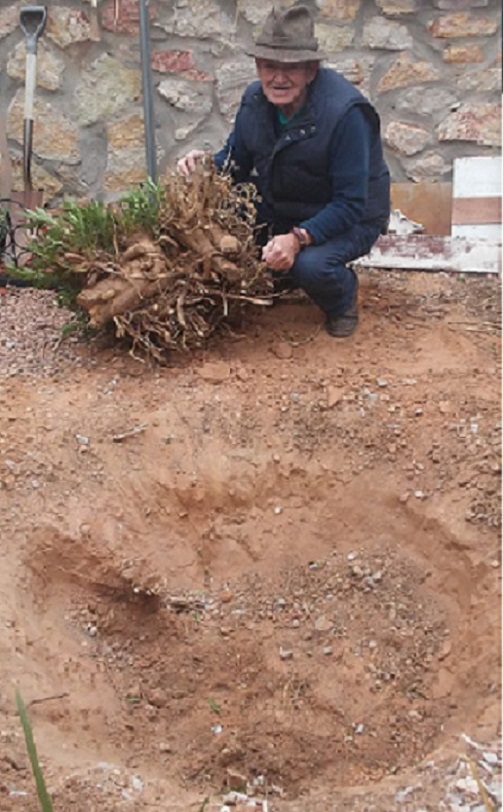 Hee, hee! If in ain’t a holy roller then it’s the last of my damn Oleander problems! Hallelujah! (Desert Mts Enterprises photo)

But finishing one project, of course, meant starting another.

The past two winters I’ve worked the soil where the Oleanders were — e.g., digging and re-digging; raking what large rocks I could get out — and adding additives to the soil hoping it still has enough Life in it to support another little bed of plants.

This past Spring I set out a motley collection of plants I’d put aside, and daily walk by and talk to them — giving ’em that booster talk, hoping they’ll just make it! (shown below)

My thought is — as a people, in myriads of ways beseeching to direct God’s Power — we all pray for each other and our world to do well, yes.

But each of us has our compartmental prayers, too. And mine certainly includes my garden.

For I have a feeling — maybe an oh-so-distant one — that God Almighty wants us to do that. Pray for the garden. 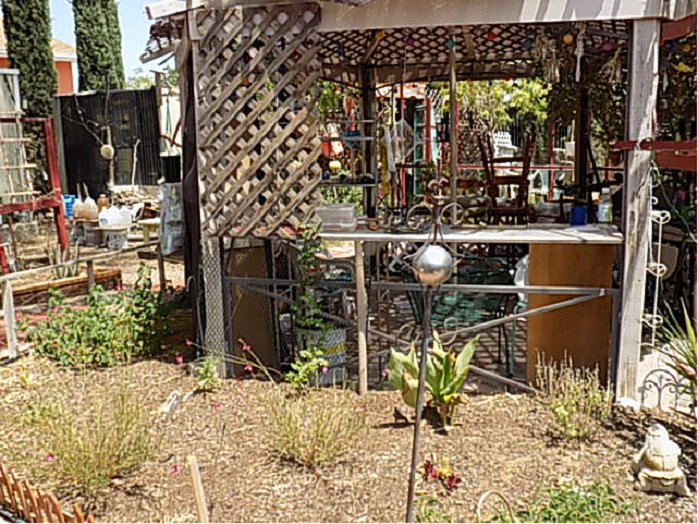 6 thoughts on “Removing Oleanders No Job For Sissies”