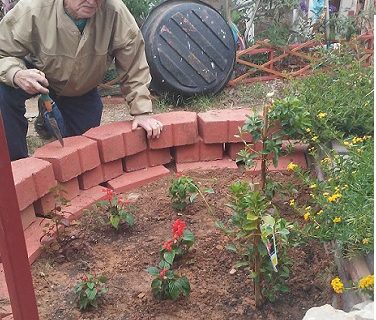 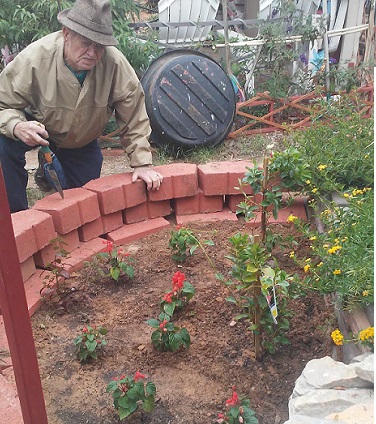 Desert Plants: Looks like they’ll be a lot easier to maintain than that nagging turtle pond!

When still chasing old dreams and being met by increased frustrations such as finance, health, or time constraints (that regularly dog old folks, i.e.), sometimes one needs simply to look hard at New Reality. Trim some fat off your to-do list. Finíte! I recently gave up on ever building a backyard turtle pond, i.e. Instead, bought some late-season plants and put in a needed flower bed. A warm winter is coming — Hey, they’ll be OK. My mind feels a lot lighter.

“Score one for sanity, Ol’ Bo!” says my altar-ego sidekick, Jethro. Indeed, it’s like a worrisome responsibility has been lifted.

This used to be taking the easy way out. That’s balderdash now! God’s given us a new Sheriff. Sanity’s been reinforced. In today’s giddy-up world, streamlining cuts out old nags — ones that ain’t ever goin’ nowhere, anyway!

But is pseudo-self absolution (this blowing off self-promises made decades ago) not a short-shrift though? Well, on fourth and long, let’s say, most football coaches will punt. Regardless of the quarterback’s arm!

Thus, don’t bog yourself down. A lighter load means more things can be done, right, Jethro?

The hint flew right over my head.

These old, questionable dreams — most of ’em forged from flimsy lifestyles over the years as simple coping mechanisms — are highly suspect, at best now.

How long had I wanted a turtle pond?

Aw, since long ago — when I saw that little pet turtle in a girlfriend’s apartment in Dallas in early ’70s, during my early college days! And each turtle encounter since has just added another layer to the wanna-bubble, of course.

One’s early adult years often are chaos for many —  i.e., bad marriages, moving a lot, undue stress from wrong-headed career choices, etc. And you put off and put off personal dreams like this, right? Awaiting better times?

One of the constants for me during these times, though, was tropical fish. A coping technique itself, perhaps, in anxious times. A promise reminder, none-the-less.

So, with all that still behind me, just before the new millennium when Noemi and I built the house over on Millington Street in Presidio, e.g., this gonna role I’d planted decades ago was well entrenched.

In fact, I was certain “now” had begun. And even for 8-9 years I sailed from one yard project to another, setting up for that perfect one, the turtle pond.

Not just rocks, a basin, and a pump for a waterfall, but a filtration system and heater for the winter months, too. Larger fish from the aquarium were to go in the turtle pond as well. They’d need fresh, circulating water.

So, in my head, I was moving along with this. Even thru the first year of my retirement.

But then came that moment when Noemi’s appointive position as director of the city’s Senior Citizens Center — caught up in shifting winds of politics — became vulnerable. In slant politics, jobs often are used in such bartering.

So, an election was approaching. And Kareli was just finishing 6th grade, too. What now brown cow? Moving into a small rental-investment house in El Paso we’d had for several years made the best sense.

Thus, at the end of May 2010, we moved. Another one for me and the turtle pond dream, it was. The aquarium and fish came right along, too.

And also, it was to yet another empty yard to landscape! And envisioning yet another space for a turtle pond. By now the dream was taking on weight, yes.

I didn’t actually dig the hole for it until this past June and July, eight years later. Again, unforeseen circumstances arose.

As Noemi and I had worked on this or that in the yard, it’d become obvious more sand was needed in places.

“I’ll take it out of the spot where I’m going to build the pond,” I said.

Two birds with one stone, right?

And after a few weeks, I had a good hole for my long-awaited turtle pond.

But then I flipped. I turned around a month or later and actually paid a contractor to bring in some sand — to fill it back up!

What the hell!? Why?

To be fair, writing a nondescript, personal narrative like this — e.g., when walking back remembered events central to an old collapsing dream — one needs to note time and place self-doubt appears.

Faits accomplis don’t arise suddenly out of vacuums! is the line I remember from somewhere.

Dirty water — especially after replacing half of it every week or so — means your pump and filtering system is out of whack. It becomes a ticking bomb of sorts. 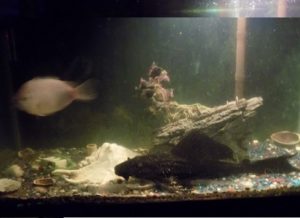 For El Negro and Blondie, it was a New Reality also!

So the real problem was a 22-23 inches long Plecostomus, a bottom feeder, and a large Pink Gourami — two old fish friends I’d had for 20 years or so — increasingly had become lethargic, moving very little. The fish tank was in our home’s study.

“What’s up with you two,” I’d ask occasionally, tapping on a side of the glass tank — delaying a decision I knew I had to make.

Confronting old dreams, when ill-equipped, can be like fighting with your first spouse, after a Sunday dinner invite has been given to the preacher and his wife. You don’t win easily!

The filtering system was inadequate, regardless of how often I’d change the water. New Reality was screaming, They’ve outgrown it!  (I knew I wasn’t overfeeding.)

The current pump is for aquariums “up to 55 gallons.” I was still ok there. The variable, though, was the fish had grown large — meaning they were dumping more poop in the water that could be properly filtered out!

I needed to double the size of my pump and filter here! And probably, soon, a larger aquarium. More money!  Combined with the pond projects, it became quite-a-bit more money!

I started looking around on places like Craig’s List, hoping to pick up a larger, used pump — cheap. And for the first time, too, for someone with turtles to sell.

Then, surprise of surprises, Jethro speaks up — Impudence out of nowhere!

Damn, Ol’ Bo! If’n you can’t maintain a simple aquarium, how do you expect to keep a turtle pond with fish in it!?

A smack-down, it was. Cold, hard New Reality health problems flushed out into the open. In the middle of a pleasant, sunny Friday afternoon worrying bout.

I’d never considered this. Can you not tread turtle pond water while caving in with dementia?

Quickly, I placed an ad on El Paso’s Craig’s List. Something like: To a Good Home, FREE! 55-gal. Aquarium and Two Large Fish, a Plec and a Pink Gourami! MUST bring large dip net and break the tank down yourself, though!

At the most, 20 minutes went by! And then, replies started piling up — 12-15 finally, if I’m remembering right!

I gave it to the second one. Anyone who’d give his mother-in-law a precious gift like this had to be a good person! And would surely take care of my two old friends.

Next morning he and wife show up. And we did the deed.

Two-three weeks after that, a Sunday, Noemi and I stopped at a Lowe’s for something. And I wandered into the nursery section.

Bingo! A firesale on leftover spring bedding plants! Many of them, salvias — paintbrushes for this old Chihuahua Desert.

Thus an old dream had been put to bed, finally. Thanks to an alter ego sidekick.

And planting the new flowers — a demarcation line for this New Reality in my life, I guess — was a joy I hadn’t imagined.

A thanks, too, that goes to our new Sheriff!

Saddle up, Jethro! We got backyard ridin’ to do!” —