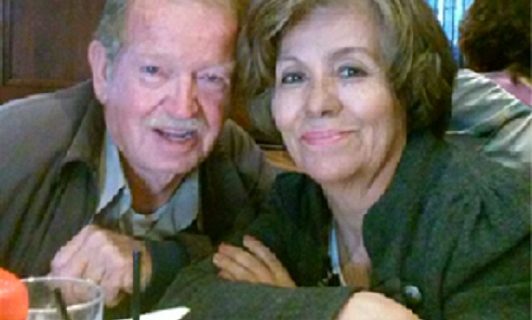 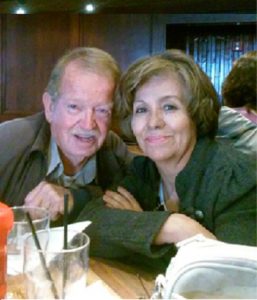 Noemi and I celebrating her birthday two years ago.

OK, friends, admittedly throwing dementia into the above title won’t rock as a mystery thriller. But it’s personal, though. So here goes.

And I’ve been quiet for a long while, also. Retirement writing just isn’t working out the way I’d figured, let’s say. So a reality check is more what this is for me, maybe. Finding a slower groove.

Most of you know me, I feel, as a former journalist, news junkie or retired JP from Presidio County, now struggling to dot the i’s and cross the t’s in a new life with incurable dementia — e.g., Vascular dementia, a V. A. neurologist informed me earlier this year. (This link defines it.)

Coping is problematic at times, yes. In early stages, probably best described as a horse placed out in the corral, a long rope around its neck, tying it to a post.

What’s the deal here?! it probably thinks initially. Why can’t I get around like I use to?! Mentally, in these cases, we’re talking about.

Another level of experience it is, too, admittedly, but certainly not one for the better. Knowing you’re in the company of millions of others helps some. And in my reading, finding out about new discoveries in treatments – possibly even cures someday — helps, too.

In addition, maybe even raising a tired, old cliché would be appropriate. Being that, for me and for a lot of people, new understandings of things come about later in our self-inflicted life, right?

After all, “You can’t teach an old dog new tricks” is not just light humor but also, appropriately, a hard reality for many of us, too.

With reason, with this disease.

Brain cells in the cerebrum, which you normally use not just for memory but also to learn “new tricks,” just give up on you! Die off, collapse. Gripe you’re not giving them enough oxygen! And show up, instead, as empty, grayish-white ghosts on your brain — whenever you have your head X-rayed, i.e.

Might as well be: Duh, AWOL, those rascals are! Where’d they go?! For you can’t learn new tricks without ’em!

As simple as that.

Personally, it explains (some, anyway) why after struggling mightily the past few years with my daughter to learn these new electronic gizmos, for instance, I usually come up short. Just can’t quite get my arms around ’em.

And the lineage for this, also I realize, is neither Bodine nor Carter, the latter being my late Mom’s last name. I own this thing personally. All those years working two jobs, for instance, or working 60-70 hours many weeks on one job — like so many of us, thinking one of these glorious days, we’ll get ahead — have all contributed to it.

Called mistreating yourself, you can say now, looking back on the times. You adversely affected your breathing system. Same with smoking cigars for 25 years — in my case, too. No glorious days for lifestyle missteps like those, no!

Reminds me of the 47-year-old billionaire Elon Musk, head of electric car and solar panel maker Tesla Inc. Worried both about tacky investors undermining him, as well as producing a better version of the Tesla auto, he told the New York Times this week this is the most “difficult and painful year of my career.”

He’s putting in sometimes up to 120 hrs. a week, staying at the company 3-4 days at a time with little sleep. Oh, another body abuser!

Someone needs to tell him that 20-25 years from now he can’t go to a nearby, friendly shopping center and purchase replacement brain cells. He’s stuck with what he’s got! (Now if Trump stays president long enough, who knows? Maybe he can look into that.)

But the purpose of sleep at night is to breathe new life into your body – e. g., recharging the energy you’ve spent during the previous day. It’s a difficult principle to comprehend when young, yes.

Brain cells feed hungrily on oxygen when you’re asleep. You disturb that process any, or even reduce the flow – i. e., in my case, carrying undiagnosed “Obstructive Sleep Apnea” (OSA) for years — and your body will make you pay for it later.

I’d never heard of sleep apnea, for one, until once from Presidio visiting “behavioral health” at the V.A. back in the late ’90s, I think it was — or possibly even 3-4 years later into the new millennium’s early ‘ought’ decade– and, it came up.

I was taking medicine for an anxiety disorder and depression that’ve dogged me for decades. One of the doctors alerted to complaints of chronic tiredness. And wild dreams constantly interrupting my sleep, sometimes even causing me to drop off the bed and strike things — i. e., splitting open my forehead on a night table once!

Sounds like Sleep Apnea, he said. And suggested I take a sleep test.

And what an experience that was! Put wires all over your body, and then tell you to sleep. I took the test in the sleep center at William Beaumont Hospital on a Sunday night, I think, latter part of the year.

Never saw the doctor. Understood he was one of the specialists in El Paso with whom the V.A. contracted. Test results are handed to these people by the administrating technician.

In fact, I’d given up on it. As a county employee, I had Blue Cross/Blue Shield also. And El Paso — when considering driving for another test, after all — was in another time zone! So I went to Dr. Darrell Parsons in Alpine.

And he set me up for a test in Fort Stockton, I believe is where Big Bend regional tests were being given then. And thus I learned I had chronic OSA.

Dr. Parsons ordered a CPAP breathing machine and mask for me, and reluctantly I began sleep therapy — for a chronic breathing problem.

Then, surprisingly, maybe 6 months later, an El Paso doctor called to my home. I remember Noemi bringing me the phone while I was outside in the garden. It was the first sleep test‘s doctor.

“You have Sleep Apnea, BAD!” he said.

“Yes, I know already, Doctor,” I told him. “We had a sleep study done out here just recently.”

He never explained the tardiness; I didn’t ask.

I think that was the moment – in my mind, mentally – I began bracing for the worst, though.

After retirement, Noemi and I decided the 3 1/2-hr. drive to El Paso (and another 3 ½ coming back) just to see medical specialists so often, was just too much for us.

So we moved in early June 2010, just after Kareli had finished up her 6th grade in school. With our three dogs – two of them pregnant.

And started our lives over. Again. In El Paso. Another new, strange place.

Reflecting now, in thousands of ways admittedly, walking around with “a hole of dead cells” in your head isn’t that big of a deal. Too, Noemi helps me a lot, of course.

But getting accustomed to carrying around a “hole” in your head — e.g., a brain ghost — has its lighter moments, too.

I’ve even named it Gray Hole. And it comes in handy. When I do something stupid that angers Noemi for instance, I simply put my hands up, and mutter, “Gray Hole did it!”

Talk about a permanent crutch…

But yeah, that’s life for us now. Moving right along in the slow lane.

Enjoying things the best we can.

And as usual, comments always welcome.

3 thoughts on “On Dementia and Sleuthing the ‘Gray Ghost’”